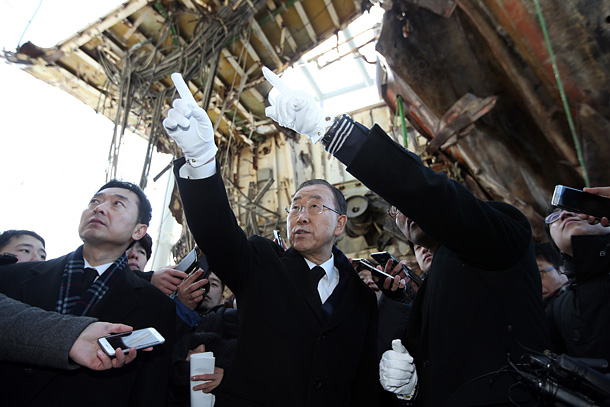 Former UN Secretary General Ban Ki-moon threw his weight behind the installation of a U.S. advanced missile defense system on Sunday in a move to woo security-sensitive conservatives in what is seen as his journey toward the Blue House.

During his visit to the Navy’s 2nd Fleet Command in Pyeongtaek in Gyeonggi, 60 kilometers (37 miles) south of Seoul, the former UN chief said Seoul needs to set up the U.S.-made missile defense system on its soil to protect itself from North Korea’s provocations, adding the missile was purely defense in nature, a remark apparently intended to appease Beijing’s anger toward the deployment of the Terminal High Altitude Area Defense (Thaad) system in Seongju County, North Gyeongsang, set to be complete by the end of this year.

“When we look at what led us to decide on the Thaad deployment, it was due to the North’s persistent efforts to develop nuclear and ballistic missile programs. The deployment was therefore in purely defensive nature as far as I am concerned,” said the apparent presidential aspirant, who has yet to declare a bid amid growing speculation he will soon do so.

“We wouldn’t need the Thaad system if our national security had not been under threat from North Korea,” said the 72-year old lifelong diplomat. He also said the Park Geun-hye government made the right decision to deploy Thaad as the country was “in a quasi state of war” with Pyongyang in what is seen as his strongest remark on national security that is certain to please security-conscious, anti-Pyongyang conservative voters.

The fact that he made the remark at the symbolic place, where the wreckage of the Cheonan warship is on display, highlighting military threats posed by the North suggests that Ban made a calculated comment to shape his image as someone who is tough on national security and North Korea. The Cheonan warship was torpedoed and cut in half by a North Korean submarine on March 26, 2010, killing 46 sailors inside.

On growing protest and economic retaliations imposed by Beijing since Seoul’s decision on the Thaad deployment in July last year, Ban said the conflict with Beijing could be resolved “through diplomacy,” without elaborating.

Upset by Seoul’s decision on Thaad, which Beijing sees as a cover by Washington to look into its airspace territory using Thaad’s powerful X-band radar, Beijing has been reducing the number of Chinese tourists coming to Korea and banning imports of some Korean cosmetics. It is also limiting the airing of Korean television shows and unofficially blacklisting Korean entertainment figures from working. The latest anti-Seoul measure involves a tightened Visa application requirement for South Koreans in which Beijing bans the use of pictures with applicants wearing glasses.

Ban’s open endorsement for the antimissile defense system came amid growing calls from the opposition that the deployment decision should be deferred to the next administration. Moon Jae-in, the presidential frontrunner of the Minjoo Party, said in an interview with local media Friday that the matter should be dealt with by the next administration and the decision to set up Thaad should be put up for a parliamentary vote following a public discussion on its merits and potential negatives. Moon also noted it would not be an easy task of backpedaling on a bilateral agreement.

On amending the Constitution, the former diplomat said he supported the revision, saying under the existing political system the same mistakes the public have witnessed in the political establishment would keep repeating. But he did not offer details of his plan for the amendment, noting he would soon announce his proposal.