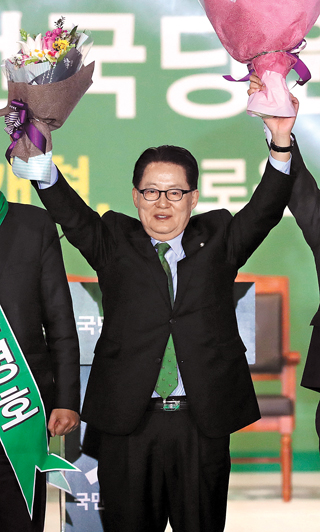 Park Jie-won thanks his supporters at the People’s Party convention on Sunday after he was elected chairman. [YONHAP]

The People’s Party, a minor opposition party in the National Assembly, elected four-term lawmaker Park Jie-won as its chairman on Sunday. He will be in charge of party affairs as the prospect of an early presidential election, to be held sometime this year, looms large.

At a party convention held at Kintex in Ilsan, Gyeonggi, the 74-year-old veteran politician clinched 61.5 percent of votes cast by party members and the general public, defeating other contenders considered to be aligned with the pro-Ahn Cheol-soo group within the party’s 38 lawmakers. Ahn, a former software mogul, co-founded the People’s Party with Chun Jung-bae after leaving the Minjoo Party of Korea in December 2014.

In his acceptance speech, Park emphasized that he would push ahead with plans to recruit as many talented politicians in the opposition bloc who oppose Moon Jae-in, a former Minjoo chairman who currently leads in most presidential polls. A presidential election could be held as early as before May if the Constitutional Court approves an impeachment motion against President Park Geun-hye. The law stipulates an election must be held within 60 days of the court’s ruling.

“We must be more powerful and bigger. Our party must become a ‘big tent’ in the ‘third zone’ where all reasonable reform-minded people can all come together,” Park said in clear reference to lawmakers who oppose Moon.

He also pledged to put in all efforts to lay out a blueprint for a constitutional amendment, calling those against a revision as “vested interest groups” who are ignoring the demands of the people.

With the election of Park Jie-won, who served as chief of staff to the late President Kim Dae-jung, attention is rising about whether he will actively move to forge a political alliance with former UN chief Ban Ki-moon to counter the current front-runner Moon.

Park acknowledged in the past that he had been approached by people in Ban’s circle about a political alliance. Those close to the Ban faction expect that having the People’s Party’s support could appeal to voters in both the Jeolla and Chungcheong regions as the People’s Party has a support base in Jeolla and the former UN chief is politically competitive in Chungcheong, his hometown.

“As the party chairman, I will shift the party’s management to the presidential election schedule, with the party candidate at the center of everything,” Park said after his election. To reach out to Ban, or anti-Moon politicians such as Sohn Hak-kyu, he said they must agree on the political philosophy of the People’s Party and undergo a rigorous vetting process.

“As for Ban, if he is willing to partake in the primary race for our nomination and undergo a strict vetting process, our door is open,” he said. Park added that there would be no special favors attached to Ban should he decide to take part in the primary.

If Ban chooses to run as a People’s Party candidate, he must compete first with Ahn Cheol-soo, who expressed confidence in a speech at the convention Sunday that the next presidential race would be between himself and Moon Jae-in.

While the political drama is unfolding with the rising prospect of an early presidential election and the homecoming of Ban, who is expected to announce his bid for president in the coming weeks, Park Jie-won is tasked with heading a party with an approval rating of just 10 percent in the latest poll by Gallup Korea. The rival Minjoo Party has a 41 percent approval rating.

Ahn, the party’s likely presidential candidate unless Ban joins the race, lags far behind in approval ratings, with just 7 percent of support, while Moon has 31 percent in the same poll.