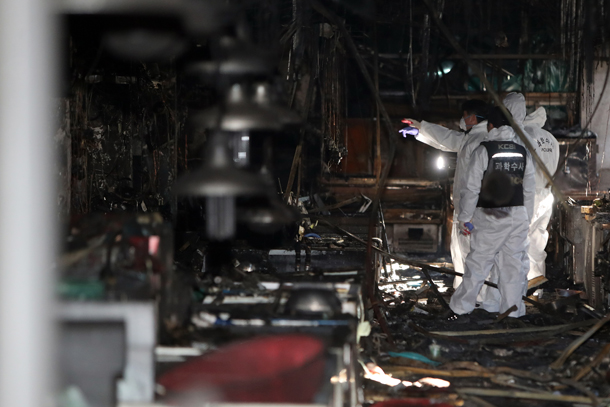 Forensic officials in Yeosu, South Jeolla, investigate the cause of a blaze at Gyodong Market on Sunday after 116 stores suffered structural damage. [YONHAP]

A fire tore through an iconic fish market in the coastal city of Yeosu in South Jeolla, about 200 miles southwest of Seoul, early Sunday morning in what appears to be an accident caused by stray voltage, local fire authorities said.

No casualties were reported, mainly because the fire occurred at 1:55 a.m. after all the merchants had wrapped up for the day, authorities said.

However, there was severe structural damage. Of the 119 stores on the first floor of Gyodong Market, 116 were entirely or partially destroyed. A store on the second floor was slightly blackened, firefighters in Yeosu said.

The blaze was completely doused at around 4:25 a.m. Nineteen fire trucks and 213 firefighters were dispatched.

The precise cause of the fire has yet to be determined. Citing CCTV footage retrieved from the venue, police said they saw an electric spark from “somewhere in the middle of the market” and asked forensic officials to clarify whether it was stray voltage.

The National Forensic Service is currently looking into the case.

Yeosu’s city government set up a task force on Sunday and vowed to look into compensation measures for the merchants, whose businesses could take a hit as Lunar New Year approaches. The four-day holiday, which starts on Jan. 27, is one of their most lucrative shopping periods.

Gyodong Market in Yeosu provides fresh marine products caught from the nearby coast. Over the decades, the district has grown as locals and visitors from outside the city have flocked to the vibrant outdoor market to buy fish, vegetables, garments and other home appliances.

Yeosu is known for hosting a world expo on marine life in 2012 that attracted visitors up to the millions. But the 2.1 trillion won project, 480 billion of which came from central government loans, failed to end on a positive note, as ticket sales fell short of initial expectations.

Yeosu authorities anticipated generating sales of 182 billion won but said they ended up reaching only two-thirds that amount.