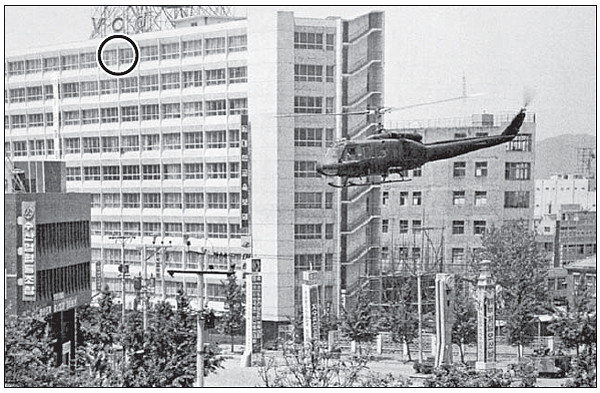 A helicopter fl ies near the Jeon-il Building in Gwangju in 1980. Inside the top-left circle of the picture is an offi ce on the 10th fl oor of the building, where the National Forensic Service found 150 bullet marks from the helicopter shooting. On the outer walls of the building, the investigation recovered 35 bullet marks. About 300 feet away from the South Jeolla Provincial Government Offi ce, the building was used as a base for citizen militia to fi ght against the national military. [MAY 18 MEMORIAL FOUNDATION]

A National Forensic Service report has revealed that the Korean military indiscriminately fired into a civilian building from a helicopter during the 1980 democracy protests in Gwangju. This is the first time the government has acknowledged the use of aerial shooting to quell the popular uprising.

Chung Soo-man, former president of the May 18 Memorial Foundation, which commemorates the protests, was 33 years old when he says he witnessed the firing. According to his testimony, he was rushing home from work on May 21, 1980, when he suddenly heard a loud bang. Chung ducked below a big tree nearby, where he saw a helicopter shooting at the Jeon-il Building.

Chung’s testimony, along with those of others who were near where the firing took place, had been denied by the government and military until last Thursday, when the National Forensic Service confirmed that “the bullet marks found in the Jeon-il Building last year most likely came from a helicopter shooting” during the protests. The agency delivered the investigation results to the Gwangju city government on Thursday.

The investigation began when the Gwangju city government began looking into the state of the building last year for the purposes of remodeling. The Jeon-il Building in the northern part of the city was well known as a battleground between citizen militia and military forces led by Chun Doo Hwan, who took control of the country through a coup d’etat a year earlier. Civilians in Gwangju protested Chun’s imposition of martial law, and the military responded brutally.

“The citizen militia installed heavy weapons on the roof of the building such as 50-caliber guns,” Park Nam-seon, who was operations director during the uprising, said during a National Assembly hearing in 1989. The Jeon-il Building was also where many foreign and domestic journalists were reporting on scenes from the uprising.

The forensic report contains information on the height and direction from which the shooting occurred based on the size and pattern of the bullet marks. The investigation reported that the bullets were likely to have been fired from a helicopter, confirming for the first time an aerial attack by the military in Gwangju. “It is likely that the bullets were shot from a hovering helicopter,” the report said.

The National Forensic Service assumes the bullet marks on the outer walls came from either 5.56-millimeter bullets or 0.3-inch bullets. In the third investigation, the agency accepted the possibility that two 5.56-millimeter shells and three 0.3-inch shells could have been used on the day of the shooting. During the popular uprising, a UH-1 model and a 500MD model were mobile, according to the forensic service. “The two helicopters either used M-60-type machine guns, which use 7.62-millimeter bullets, or M-134 minigun types,” the report said.

While the National Forensic Service has admitted the shooting came from a helicopter, it deferred a definite conclusion on the type of the weapon used on the grounds that “there is no conclusive evidence to verify the type of firearm.”

The report did leave room for the possibility of a conclusion, explaining, “There may be residue of bullets remaining between the roof slabs of the Jeon-il Building. We may be able to know for certain which firearm was used if we excavate bullets in the roof.”

The recent report runs counter to previous arguments by the government and military. The military had argued in the 1989 hearing and 1995 investigation by the prosecution that in Gwangju, “tens of thousands of citizens were swarming toward [the military] and had taken over the armored vehicles, and [the military] had to shoot as self-defense in fear of their lives.”

The Republic of Korea Army Headquarters, amidst rising controversy on the helicopter shooting, said that it has no record to verify the facts.

Having come close to revealing the truth of the helicopter shooting 37 years ago in the popular uprising, the Gwangju city government will preserve the building as a memorial.

“As its historical symbolism has been confirmed, we will preserve the original appearance of the building to make a memorial site in the Jeon-il Building, and abort the demolition and remodeling plan,” said Yoon Jang-hyun, the mayor of Gwangju.