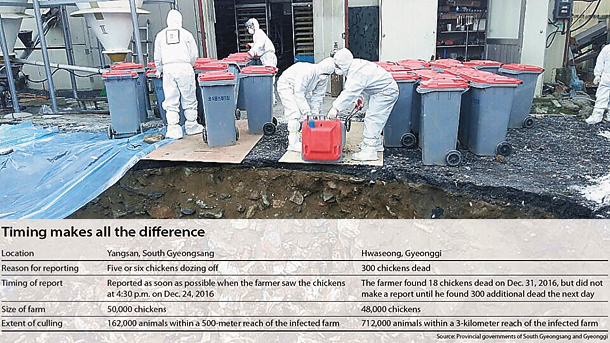 At least five farms throughout the country did not report suspicious cases of avian influenza on time, and more may be failing to do so, partly due to a systemic loophole in the government compensation system for the highly pathogenic H5N6 avian influenza outbreak.

The Animal and Plant Quarantine Agency is investigating five or six cases of delayed reports by farmers. These include a duck farm in Muan County, South Jeolla, and a farm in Anseong, Gyeonggi.

But the current system of compensation for mass culling may be encouraging more to delay reporting suspicious deaths, worsening the outbreak. 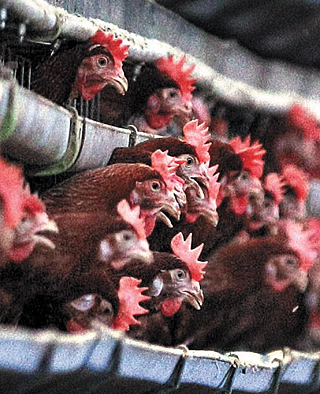 This is because the farmer is considered responsible for not properly maintaining a sanitary environment. Many ducks and chickens in Korea are bred in battery cages, or rows and columns of identical cages connected like battery cells.

But the compensation system has created a loophole.

“The government penalty measure on farms found with the avian influenza has created a side effect, where some farmers delay their reports and wait until another breakout takes place in their vicinity,” said Jang Hyung-kwan, professor of avian diseases at Chonbuk National University in North Jeolla. “This phenomenon must be addressed immediately.”

Therefore, even if a farmer finds suspicious deaths, he or she has the option to wait until another farm nearby becomes infected.

If the farmer is lucky, and the authorities do not find the avian influenza virus on his or her land, then the farmer will receive full government compensation.

The compensation loophole is not good news given that early reporting and culling ensures stronger control over the outbreak. The bird flu continues to ravage chicken and duck farms throughout the country, leading to mass culling and costing the country almost 1 trillion won.

“When some farmers dilly-dally in reporting deaths to health authorities, the disease spreads exponentially in that time,” said Yoon Jong-woong, president of the Korean Association of Poultry Veterinarians. “And the flu spreads not only via trucks transporting the feeds and eggs, but through the ventilation vans of the farms.”

When five or six chickens at a farm in Yangsan, South Gyeongsang, were seen dozing off on Christmas Eve last year, a 69-year-old farmer surnamed Suh reported his farm to health authorities just in case.

His 50,000 chickens were culled, in addition to those at farms within the 500-meter reach.

On the other hand, 18 chickens were found dead on Dec. 31 at a farm in Hwaseong, Gyeonggi. The farmer thought the number insignificant, and did not report the deaths immediately.

The next day, he found 300 more dead. He made a report to the health authorities then, and they culled the animals at his farm and at other farms in the vicinity.

In the two examples, the extent of the two cullings differed greatly.

In the former case, six farms around Suh’s farm had to cull 162,020 birds. As of Jan. 9, there was no additional outbreak in Yangsan.

In the latter case, health authorities had to expand the area for culling because the disease had spread extensively. A total of 712,000 animals within a 3-kilometer (1.8-mile) reach were culled.

Experts are calling for immediate responses from the government to close the loophole.

“The government is considering changing the policy so that if a farmer is found to have delayed the report, he or she will receive 20 to 40 percent less of the compensation,” said Kim Yong-sang, head of the Animal Health Management Division of the Ministry of Agriculture Food and Rural Affairs.