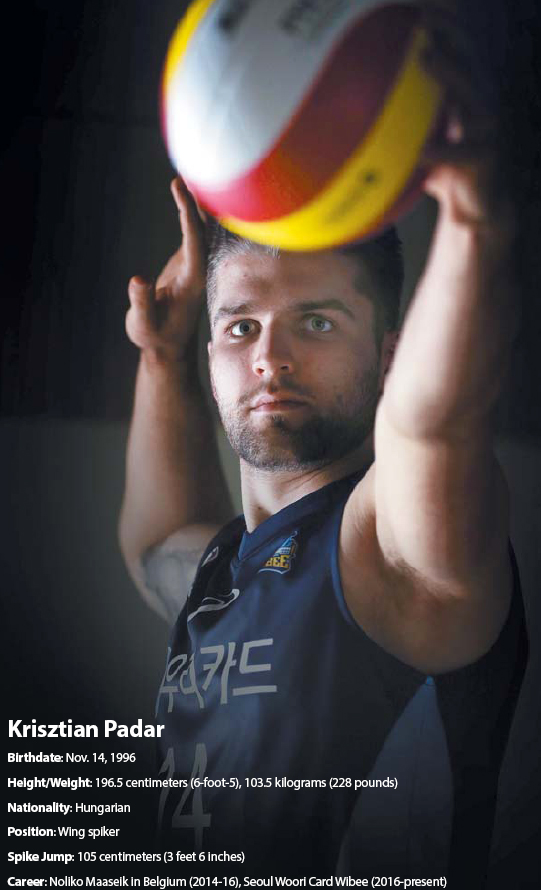 Krisztian Padar, Seoul Woori Card Wibee’s Hungarian wing spiker, has been at the heart of the team’s rise from underdog to postseason contender. [OH JONG-TAEK]

Ever since their debut in the Korean Volleyball League in 2008, the Seoul Woori Card Wibee have always been underdogs. Every year, the team tried to qualify for the postseason, and every year, they failed - until now.

On Sunday, Woori Card Wibee scored a 3-1 victory against the Daejeon Samsung Fire & Marine Insurance Bluefangs during a home game at Jangchung Gymnasium in central Seoul. It was their fourth straight win, and it was enough to propel them into the playoffs.

With 13 wins, 10 losses and 40 league points this season, Woori Card Wibee is fourth in the V-League, putting them at third in the playoffs. Their point difference against the leading Incheon Korean Air Jumbos (with 15 wins, 7 losses and 43 points) is a mere three points.

The underdog has become a powerhouse. Sunday’s game was sold out, and the team did not disappoint. Woori Card Wibee gave up their first set 22-25, but they clawed their way back in the second and third sets.

At the heart of the change was the team’s youngest player: the 21-year-old wing spiker from Hungary, Krisztian Padar.

During the fourth set, Padar secured a point at every turn. He roared loudly after ending the game with a block for the fourth set’s match point.

It hasn’t been a smooth ride for the Hungarian spiker. “When we chose Padar, I really had a lot of concerns,” Kim Sang-woo, coach of Woori Card Wibee, confessed. “Compared to other foreign players, he was shorter and his young age weighed heavy on my mind.”

For the most part, foreign players in their late 20s or early 30s with experience under their belt are preferred. At 196.5 centimeters (6 feet 5 inches), Padar was the shortest among foreign players, and he was placed 21st out of 24 athletes in the draft.

Why would Coach Kim pick Padar then? He might be short, but Padar’s total wingspan is nearly 9 feet. His spike jump height, about 3.5 feet, is also good.

Kim struck gold. As of Monday, Padar is second in the league in points scored with 602 points, and he’s recorded a triple crown in serves, back row attacks and blocking.

His teammates on Woori Card Wibee have only praise for him. “He’s the best foreign player to have come to Woori Card,” they often say.

In Korea, Padar found a space to grow. In the beginning, his deficiencies in the basics were apparent. While blocking, his palms bent backward, and he was reluctant to own up to his toss. “In Hungary, I only practiced hitting,” Padar said. “I wanted to play better in volleyball, so I was determined to go overseas. I had interest in Korea, where they tidied up the basics.”

After joining the team last August, he absorbed all the coaching staff’s techniques like a dry towel. His toss gained stability, his serve grew in strength, and he grew more confident at blocking. “I saw him growing [in front] of my eyes,” Kim said. “His view of the court is broader. He mixes hard strikes and continuous strikes properly.”

For Padar, whose forte is jumping, his utmost concern is weight control. He measures himself on a scale six times a day, including the moment he wakes up and after every meal. “On a standard of 103.5 kilograms [228 pounds], I allow myself only a 1 kilogram fluctuation,” Padar said. “Maintaining proper weight is imperative for maintaining perfect condition.” He doesn’t indulge in fast food and subsists strictly on a menu of low-fat meat.

The sprightly Hungarian has become a positive influence for his fellow teammates. “I don’t know whether it’s because we always lost, but when I first came, team spirit was sagging a lot,” Padar said. “However, we’re not the team from back then. Holding on to the end, we found the strength to become stronger.”

Padar’s Korean dream was as he anticipated. “I want to have my first victory with Woori Card Wibee,” he said with brimming confidence.