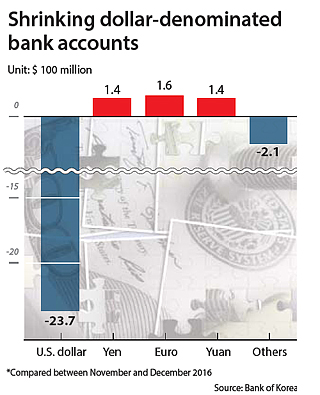 Despite the recent appreciation of the U.S. greenback, the dollar-denominated bank account has actually shrunk as many are concerned about the foreign-exchange volatility.

The Bank of Korea said Monday that the balance of foreign-currency denominated bank deposits as of December amounted to $58.9 billion, which is $2.14 billion less than the previous month or 3.5 percent less.

This was the first time the accounts have fallen below $60 billion since July as deposits have shrunk in the past four months.

Among foreign currencies, the accounts in dollars saw the biggest drop as it was $2.37 billion less than in November to $49.7 billion or a 4.6 percent drop. The U.S. dollar account has been the primary cause of shrinking foreign-currency deposits as it has fallen for four consecutive months.

The U.S. dollar-denominated deposit accounts for the majority of the foreign-currency deposits with 84.3 percent.

Although the central bank said Korean exporters are withdrawing their dollar accounts for trade payments as corporate deposits have shrunk nearly $2 billion in December, individual account holders have also withdrawn $410 million from the dollar-denominated accounts due to increased volatility of the won-dollar exchange.

The dollar appreciated largely on rising expectations that the U.S. Federal Reserve will further raise its interest rates as the incoming presidential administration is expected to expand fiscal spending to bolster the U.S. economy. As a result corporate and individual account holders have been selling off their dollar holdings.

“In December there has been movement in the market where people were selling off their dollar holdings in hopes of profiting from the appreciated dollar,” said a BOK official.

Last month, the average won-dollar exchange was 1,181 won against the U.S. greenback, a 1.7 percent depreciation to the 1,161 won in November. The dollar has risen against the Korean currency since September when it was 1,089.70 won on average. Other currency accounts rose in the same period.

The Japanese yen, which is the largest foreign-currency denominated deposit after the U.S. dollar, accounting for 6.2 percent, added $140 million in December compared to the previous month to $3.63 billion. This is a 4 percent increase.