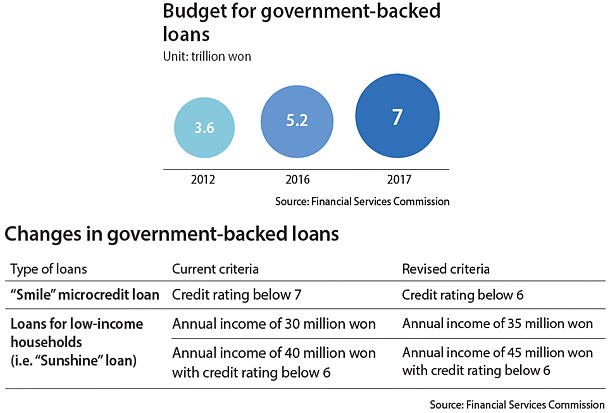 The regulatory agency plans to raise the upper income limit for government-backed loans to make more people eligible for them. To accommodate the increase in borrowers, the government will expand the budget for loan programs this year to 7 trillion won ($6 billion).

“As our economy remains sluggish, households with lower income or in more vulnerable conditions, such as single-parent families, are exposed to greater financial risk,” said Choi Joon-woo, director general of the consumer finance and protection bureau at the Financial Services Commission. “Our goal is also to design support policies designated for households with different needs.”

There are currently four different types of government-backed loans specifically targeting the general public with lower income, including the so-called “Sunshine” loan, which lends low-wage earners some extra income, and the “Smile” microcredit loan for small businesses.

For the Smile program, which provides unsecured loans to low-income small-business owners, the government will lower the credit rating standard from seven out of 10 to six. A lower rating indicates worse credit.

So-called mid-rate loans (with interest rates ranging between 6 and 18 percent), first launched last year to target those with midrange credit scores, have become popular in Korea. As a result, the Financial Services Commission said it would supply an additional 1 trillion won after the already-planned 1 trillion is exhausted. Due to the popularity of the loan, the financial regulator expects the initial amount of 1 trillion to run out early this year.

At the moment, Korea uses a system in which a person’s credit is rated on a scale of 1 to 10. While it is intended to evaluate a person’s creditworthiness, the problem with the current system is that it generalizes a person’s credit value based on a group scale rather than individual credit files. For instance, at least 3.5 million people are given a rating of six, which means in that category, there is a wide range of individuals with different credit backgrounds and circumstances.

“We need to individualize credit scores based on each person’s files,” Choi said. “We are thinking about establishing a credit scoring system that rates a person on a scale of up to 1,000.”

Under the current system, a person’s credit rating can drop with just a few late bills, and it takes a long time for the rating to be restored. The financial regulator expects this asymmetry might be fixed with the new system.

“Individuals will be able to see what went into the review process for their credit scores, and positive factors that raise their scores can be fully taken into consideration, unlike right now,” Choi at the regulatory agency said.