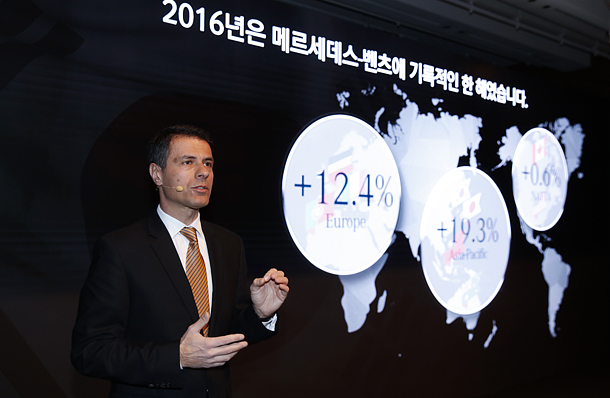 “I think we can touch or hit the 60,000-unit barrier,” Dimitris Psillakis, Mercedes-Benz Korea president and CEO, said Monday at a press conference at Hotel Shilla. [MERCEDES-BENZ KOREA]

Mercedes-Benz Korea vowed to sell 60,000 vehicles in 2017 with its six new lineups, demonstrating a determination to hold on to its hard-earned No. 1 spot in Korea’s import car industry.

Last year, the Korean unit of the German luxury carmaker replaced BMW as the leading import car brand, a space it had dominated for eight years, by posting a 19.9 percent year-on-year soar in sales and sold 56,343 vehicles. It is the first time in 11 years Mercedes-Benz has taken the top spot in Korea’s import car market.

“The 2017 year is a complicated year,” Dimitris Psillakis, Mercedes-Benz Korea president and CEO said during a press event Monday at Hotel Shilla in central Seoul.

“The economy is not growing as expected and politically, there are certain obstacles. However, we want to grow and I think we can touch or hit the 60,000-unit barrier,” Psillakis added.

One of the carmaker’s strongest weapons was that it launched six models from various segments, ranging from compact cars to sedans and SUVs. The compact car segment will release a new car from the GLA class and the SUV segment will release the new GLC Coupe in March. With the launch of GLC Coupe, Mercedes-Benz Korea will possess the largest SUV portfolio in the import car market.

Aside from the new models, Mercedes-Benz will introduce 48 variations from the exiting lineup.

Mercedes-Benz Korea also said the new lineup will include plug-in hybrid versions which aren’t yet named.

“We are approaching the matter strategically,” said Martin Schulz, vice president for sales and marketing at Mercedes-Benz’ Korean unit.

“Plug-in hybrid cars are already out in the market, but it is a matter of infrastructure such as the charging stations. It takes time to prepare and launch the product at the right moment so the customers can enjoy the product fully.”

Another strategy for Mercedes-Benz to reign in Korea’s competitive import car market this year is the enhancement of its customer service.

The German automaker said it will invest 200 billion won ($169 million) in its dealerships network to increase the number of showrooms to 50 from 42 and service centers to 55 from the current 48. It will also have 20 showrooms for certified pre-owned cars.

The showroom will become more “futuristic” and “entertainment-oriented,” according to the carmaker. Some of the display zones will be designed for specific models. The consulting and auto service will become more digitized this year, enabling customers to make reservations and observe the process in real-time from mobile platforms.