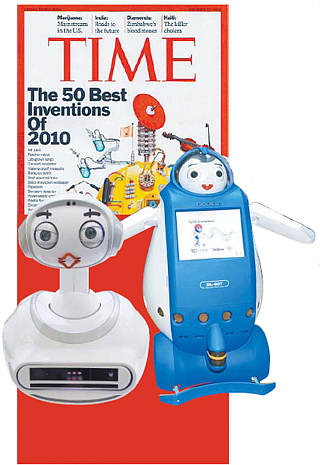 In 2010, Korean researchers produced an English-teaching robot that Time magazine hailed as one of the “best inventions of the year.” The robot, named Engkey, could move, talk and make facial expressions in response to human speech. Time said the robot could one day put English teachers out of work and heralded a promising future for Korean research in robotics.

But six years later, Engkey has all but faded from the public imagination. It was nowhere to be seen at this year’s Consumer Electronics Show, which was notable for the heavy participation of eye-catching new robots including a donut-shaped desktop assistant from London-based start-up Olly and a smart toy for children with developmental disorders from the French start-up Leka.

Engkey was the result of a 10-year project started in 2003 by the Korea Institute of Science and Technology and the Korean government to develop robotic teaching aids. The two jointly established a corporation, Robocare, in 2012 to commercialize the technology.

KIST unveiled two more robots, one to provide educational content for the elderly and another to help with directions. The team boasted that the robots contained over 30 different kinds of software to recognize human faces and converse freely. Robocare was able to sell four of its robots to Denmark, and things seemed to be looking up for the company. 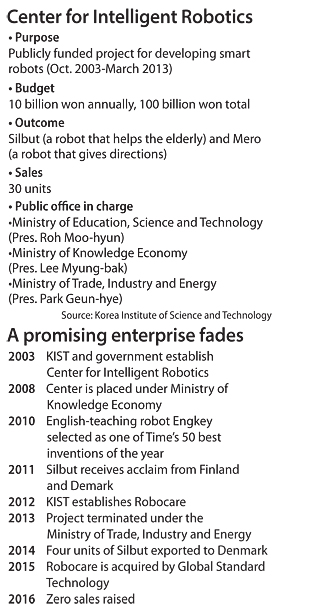 But the joint project with the government was only meant to last 10 years, and the government had no interest in extending the project beyond its original due date. The funding was cut, and in December 2015, Robocare was sold to a midsize company, Global Standard Technology, making it a private entity. Last year, they sold no robots, and Engkey now sits in a science museum, a relic of the past.

“We wanted to take part in CES, but we held back due to lack of confidence in our level of technology,” said a source working at Robocare.

The company fell victim to new policies on research and development after the government changed hands in 2008. Under President Lee Myung-bak, the Center for Intelligent Robotics, which was conducting the research, was transferred from the Ministry of Science to the Ministry of Knowledge Economy (now the Ministry of Trade, Industry and Energy).

The two ministries differ greatly in their research focus and outlook. Whereas the Science Ministry oversees long-term basic science research, the Trade Ministry is focused on applied technology that can be commercialized quickly. The new administrator wanted concrete outcomes.

The private sector, too, had turned its back on robots. Companies said they were only interested in researching technology that was practical enough to form a market within the next three to five years. That’s in contrast to other countries like Japan, where Honda has accumulated robotic technology over the past two decades.

“This research was once funded by huge amounts of taxpayer money,” said one source in a publicly funded research center. “But the ignorance of major Korean companies, which only value short-term outcomes, and the government’s R&D policy, which is lacking in both philosophy and consistency, are ruining the research.”