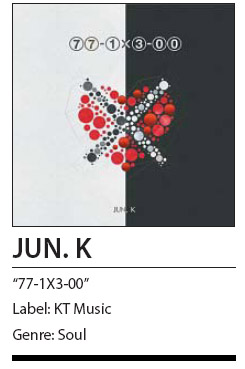 Nothing is conventional about the latest album by Jun. K, the idol superstar and lead vocalist of K-pop sensation 2PM. Formerly known as Junsu, the singer decided to go by his new moniker when his solo career had begun surging in popularity while his talents as a songwriter were beginning to be noticed by star producer J.Y Park.

The name of the album is a special code meant to be deciphered by fans, and all ten tracks are stylized in lowercase letters. The laid-back musical flow and catchy choruses are the continual theme of the record. The stylization of the album provides an artistic complement to the package.

The lead single “no shadow” is surprisingly experimental for an artist of his reputation. This is not a record for loyal fans of 2PM’s music, and may even draw disapproval from listeners of mainstream R&B. However, the musical freedom expressed by the songwriter in this career-defining record is not only admirable, but noteworthy in the sense that fellow R&B artists should be taking note of the listening experience.