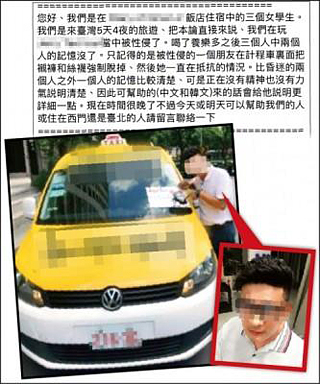 A taxi driver was detained Sunday by Taiwanese authorities for allegedly trying to drug three young Korean women touring Taipei and sexually assaulting at least one of them.

The three young women were on a five-day trip to Taiwan and hired a cab around 7:20 p.m. on Thursday to take them from Wanhua District to the Shilin Night Market, a popular tourist attraction in northern Taipei, and then back again.

They hired the taxi service through the internet before arriving in Taipei, said police.

The taxi driver, a 39-year-old man surnamed Chan, allegedly gave them yogurt drinks mixed with sedatives on the way to the market in Shilin District, an expat hub, according to Taiwanese police.

The woman who sat in the front passenger seat only took a sip of the drink because she thought it tasted strange. But her two friends in the back passed out after drinking it.

Since her two friends were asleep, the woman in the front seat went to explore the night market at around 8:20 p.m.

Chan then drove the car to a secluded area near the market and allegedly sexually assaulted at least one of the two unconscious women.

The two women realized something was amiss when they recovered from the sedative.

The three women, friends in their 20s who graduated from the same university, arrived in Taipei for a five-day trip last Wednesday.

Chan turned himself into police late on Saturday evening and was taken to the Shilin District Prosecutors’ Office on Sunday for further questioning.

Chan, who police say admitted to drugging the drinks and sexually assaulting one of the women, was detained Sunday.

Traces of sedative were found in the women’s blood.

But a woman who claims to be one of the victims posted on a travel website that when she called an official from the Korean Mission in Taipei to request help, she was told, “Why are you calling at this time of the night?”

A Korean foreign affairs official said, “The first phone call arrived early on Jan. 14, at around 3:40 a.m., and the administrative staff in charge says he did not make such a remark.”

The Korean Ministry of Foreign Affairs said through a statement that an administrative official of the Mission in Taipei received a phone call from one of the victims at around 3:40 a.m. and informed her that in the case of sexual assault, it is up to the victim to report to the police.

This official told her to get in touch with the mission after reporting the incident to the police.

When the victim did not get in touch again, the mission made numerous attempts to call the victims and was able to get in contact at around 1 p.m. Saturday. After confirming they were with the police, the mission said it immediately sent officials to the station.

The women underwent medical examinations to test for traces of drugs in their body and to determine their psychological condition as well. A consulate staffer was said to have accompanied the women to the hospital and also offered support as they filed the case with the police.

Taiwanese prosecutors Monday said they obtained security camera footage of Chan from the cab. They also found receipts for the yogurt drinks and a box of syringes in the vehicle

Prosecutors suspect that Chan used the syringes to spike the unopened drinks with sedatives. They also suspect Chan of being a repeated offender based on the box of syringes in his cab.

He faces a maximum of 17 years in prison if he is found guilty. He could face up to 10 years if convicted of sexual assault and a separate seven-year sentence for drugging the women.