‘Despite scandals, PyeongChang is all clean’

‘Despite scandals, PyeongChang is all clean’ 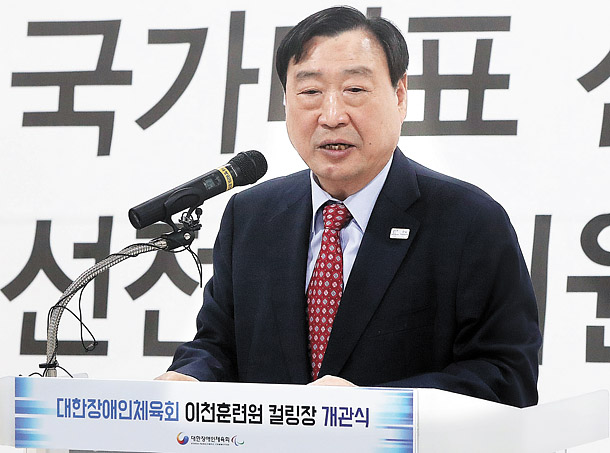 Lee Hee-beom, head of the organizing committee for the 2018 PyeongChang Winter Games, speaks at the opening ceremony of the curling arena in the Icheon Training Center about PyeongChang’s Olympic preparations on Jan. 13. [YONHAP]

PYEONGCHANG, Gangwon - The head of the 2018 PyeongChang Winter Olympics said Tuesday that preparation for the games has been “clean,” even with the sports community mired in a nation-rocking influence-peddling scandal.

At his first press conference of 2017, Lee Hee-beom, head of the PyeongChang Organizing Committee for the 2018 Olympic & Paralympic Winter Games (Pocog), addressed the impact of the scandal involving President Park Geun-hye and her confidante Choi Soon-sil on the build-up to the country’s first Winter Games.

Choi is accused of using her ties with Park to meddle in state affairs. And prosecution sources said Tuesday that Park sought to award lucrative Olympic construction contracts to a Swiss firm linked to Choi’s businesses.

In the Olympic host city, some 180 kilometers (112 miles) east of Seoul, Lee insisted construction contracts for the games have been handed out in transparent fashion, and there was simply “no room” for any corruption to have occurred.

“It’s been widely reported that Choi Soon-sil and her associates had tried to exploit the PyeongChang Olympics to make profits,” Lee said. “But while PyeongChang might have been a target for such corruption, I can tell you that none of such attempts actually materialized.”

Lee, who took over as the Pocog president last May, said most of the major construction projects had already been under way by the time Choi tried to wiggle her way into the plans. Lee added that the state-run Public Procurement Service has handled tenders for construction deals and thus couldn’t have been influenced by illicit outside factors.

“If you find any evidence of corruption [with PyeongChang 2018], you should let me know,” Lee told reporters. “Tendering processes by the government aren’t that sloppy. They have been transparent, and they will continue to be so.”

Lee, former trade minister, succeeded Cho Yang-ho, the Hanjin Group chairman who stepped down apparently to focus on his troubled shipping business. However, prosecution sources said Cho appeared to have been pressured into quitting his Pocog job because he wasn’t being cooperative with Park’s plans.

Lee said he has no knowledge of any “conspiracy” surrounding Cho’s sudden departure, adding he can’t afford to be caught up what took place in the past.

And Lee does have plenty on his plate. The PyeongChang Games are about a year away, and Lee is still struggling to secure corporate sponsorships.

Lee said sponsorships will account for 38 percent of the Olympic budget. PyeongChang’s goal is to secure 940 billion won ($793.4 million) from the business community.

Lee had pledged that he’d reach 90 percent of the target by the end of 2016, but the figure is sitting at about 841 billion won, or a shade under 90 percent. The Pocog chief blamed the sluggish economy - which in turn has been influenced by the scandal - for companies’ reluctance to open their wallets.

“Deals with about 10 companies, worth more than 30 billion won, were supposed to have been signed last year, but they’ve been pushed back,” Lee said. “We’re also hoping state-run companies and financial institutions will also offer to help.”

Lee is also still trying to figure out how to use two of the 12 Olympic venues after the games. He said the Pocog and the International Olympic Committee (IOC) are discussing ways to ensure these venues and the host city won’t be left abandoned and become a “white elephant.”

One possibility is to turn the venues into practice facilities ahead of the 2022 Winter Olympics in Beijing. It will mark the first time two Asian nations will host consecutive Winter Games, and Lee has engaged his Beijing counterparts since last year for a series of other cooperative measures.

The Pocog is also planning a major celebration on Feb. 9, when the countdown to the PyeongChang Olympics will reach one year.

“Given the current political climate, it’s been difficult to raise people’s interest in the PyeongChang Games,” Lee said. “We’ll put together promotional campaigns. We won the Olympic bid on our third try, and our national pride is at stake. We can’t afford to fail.”