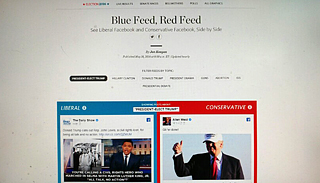 When U.S. President John F. Kennedy nominated his 35-year-old brother Robert as Attorney General in 1961, the decision was criticized as an act of nepotism.

When reporters asked why, Kennedy smiled and said that his mother and brothers thought it was a great decision. Kennedy responded with a joke when asked an awkward question. But what we should learn here is that collection of biased opinions due to interests, family ties or regional relationship can never represent true public opinion or collective intelligence.

Right after the U.S. presidential election result was announced in November, many Clinton supporters panicked and could not accept the outcome. They never doubted Clinton’s victory. Thousands of supporters gathered at the Jacob Javits Center in New York, where a celebration had been scheduled. They weren’t interested in meeting any Trump supporters around them, in person or on Facebook. As a result, anti-Trump rallies spread around the United States.

After the election, American society, especially mainstream media, investigated the problems surrounding this controversial election. A study showed that social networks like Facebook and Twitter serve as echo chambers, distorting awareness and encouraging political extremism. An echo chamber is a room where sound reverberates. No matter what you say here, you only hear back the same. Therefore, when you look at the world through Facebook, you are surrounded by similar opinions and become biased.

Birds of a feather flock together. Facebook friends tend to share political inclinations. So, the postings of your friends mostly coincide with your opinion. When you continue reading these postings, you become prejudiced. Clinton supporters have seen only anti-Trump stories on Facebook and mistook that the entire world loathed him.

Therefore, after the presidential election, American media defined the polarization of ideologies and loss of balance because of social network as a new enemy of democracy. Since last year, the Wall Street Journal installed a Blue Feed, Red Feed tool, illustrating how the two sides live in completely different news cycles. Click one of the eight topics, including Donald Trump and Hillary Clinton, and Facebook newsfeeds that liberals and conservatives see are shown side by side. These feeds show how biased people are.

Moreover, Facebook has an algorithm to show the postings of contributors who have more likes from certain users on top. The strategy to boost clicks fans the echo chamber effect.

Throughout the election campaign, fake news on social networks was just as serious. Scandalous stories tend to be more popular online.

For those who make money based on the number of clicks, facts were not their concern. In fact, a fake story about an FBI agent being murdered while investigating Clinton’s email scandal spread online and created a stir. The problem is that there are little restrictions on spreading fake news.

Unfortunately, the vices of social networks are not limited to the United States. It is more serious in Korea. It is doubtful whether the grand integration of the people can be possible after the next election. The structure of denouncing candidates with different political views with fake news and spreading and reproducing fake stories should not be condoned. At this rate, no matter who becomes president, he should lead the nation while being hated by nearly half of the nation. Getting over the national crisis is not easy even when the nation is united.