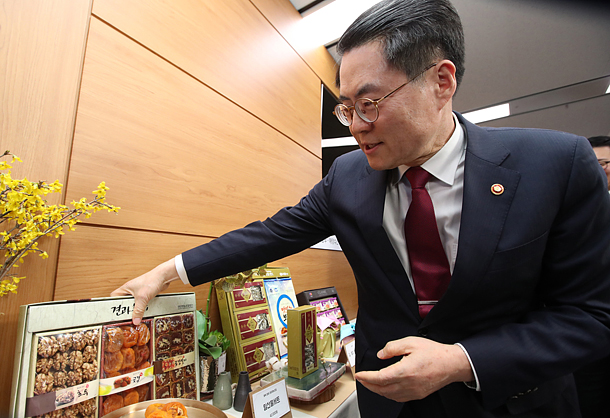 Kim Jae-soo, minister of agriculture, food and rural affairs, introduces gift sets for the Lunar New Year that meet the guidelines of the antigraft law in this file photo from Jan. 10. The government is now considering amending the guidelines. [YONHAP]

The government responded positively to a request by the ruling party to water down an antigraft law that has hurt a range of businesses in the four months since it was adopted.

“We have once again urged the government to swiftly revise the Kim Young-ran Law,” Lee said in a press briefing. “We agreed that the agricultural sector and livestock farms have faced huge difficulties because of it.”

The law limits government employees including school teachers and journalists from exchanging gifts or paying for meals above certain limits, which has hurt many small businesses such as restaurants and florists.

Since late last year the government has been mulling the idea of raising the limits without changing the purpose of the law, which is to reduce corruption and influence peddling.

When the government was announcing its economic management plans for this year earlier this month, acting President Hwang Kyo-ahn asked officials to come up with fine tuning measures.

Under the law, public officials cannot accept meals costing more than 30,000 won ($25.54), a gift worth more than 50,000 won or more than 100,000 won in cash or presents for a wedding or funeral. These are referred to collectively as the 3.5.10 rule. In some cases there are stricter regulations: teachers not allowed to accept a can of coffee from parents or students.

There has been speculation that the limits will be either raised to 5.10.10 or 100,000 won limits for all three categories.

The latest victim of the limits in the law is Namgang, a Korean restaurant in central Seoul with 40 years of history.

An out of business notice has been posted on the entrance to the two-story building near the JoongAng Ilbo headquarters since Dec. 31.

The restaurant was famous for its bulgogi, marinated beef, and getting a seat was nearly impossible at lunchtime without a reservation. But today, the tables and chairs are empty and the lights are off.

According to Namgang’s former manager, group reservations dropped significantly after the antigraft law was enacted in late September and as a result daily revenue was halved to 4 million to 5 million won.

According to a recent study by the Korea Food Service Industry Research Institute, 84.1 percent of the 709 restaurants surveyed said their revenues shrunk in December when compared to a year earlier by an average of 36 percent. Some 52.5 percent of the restaurants said their revenues steadily declined from October and November, when they fell an average of 13.8 percent.

The research institute said it expects the restaurant industry to face an even harder time in 2017. It predicted a sharp rise in businesses going out of business or firing employees.

Another study by the Korea Federation of Micro Enterprise showed difficulties facing self-employed entrepreneurs. Fifty five percent of 3,000 self-employed businesspeople said their revenues have shrunk 55.3 percent due to the antigraft regulations.

On Sunday, the federation submitted a complaint to political parties asking for help for small businesses.

“The political community should solve this problem before the Lunar New Year, which is the first national holiday since the Kim Young-ran law was enacted,” said Choi Seung-jae, head of the federation. “Now is the golden time to revise the Kim Young-ran Law.”

Concerns about the antigraft law come as the domestic economy weakens. That is on top of weakness in Korea’s export, which have been declining since 2015.

Late last year, the finance minister lowered his economic growth target for this year to 2.6 percent citing a weaken domestic market as the primary downward factor. The Bank of Korea also lowered its outlook to 2.5 percent for the same reason.

“The economic outlook has been lowered considering various factors including weak domestic consumer sentiment, which might lead to domestic consumption weakening furthermore,” BOK Gov. Lee Ju-yeol said Friday when announcing the revised outlook for this year.

“We also think the weak labor market due to ongoing corporate restructuring is also taking a toll on consumer sentiment.”

While businesses are expected to face a tough 2017, worries are growing about their debt levels.

According to a report that the BOK submitted to the National Assembly last month, as of the end of the third quarter last year, outstanding loans borrowed by 1.41 million self-employed entrepreneurs amounted to 464.5 trillion won. Some 300 trillion won was borrowed as business loans while 164 trillion won were in mortgages.

“Many of those in economically vulnerable situations have borrowed from non-banking financial institutions with higher interest rates and are in a very weak position when interest rates are raised,” said a BOK official.