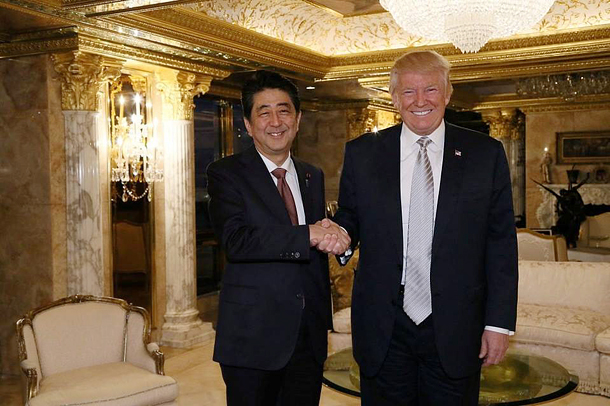 Japan’s criticism of U.S. President-elect Donald J. Trump is escalating, as Trump mentioned trade imbalances with Japan, Mexico and China during a news conference on Jan. 11. He had also criticized Toyota for a plan to build a new plant in Mexico.

The Liberal Democratic Party’s secretary general, Toshihiro Nikai, was the first to attack Trump. On Jan. 13, he said, “You should behave more quietly and calmly. Be more gentle. Is it suitable for the president of a superpower to rant in a unilateral and hysterical manner?” His criticism was direct, unlike the signature, roundabout way of the Japanese. He is No. 2 in the ruling party and a close aide to Prime Minister Shinzo Abe.

On that same day, while explaining Japan’s investment in the United States, Japanese Finance Minister Taro Aso said, “Trump should hear this number.” He was obviously expressing displeasure. Other ruling party figures also condemned Trump. “Many people are worried that he will have the nuclear code,” Itsunori Onodera said. “He is negotiating by posing uncertainty and tension,” Shigeru Ishiba said. “The international situation is surely unstable for now.”

So much has changed since Abe called Trump a “trustworthy leader” upon meeting him. A television variety show derided the United States for going from police of the world to gangsters. Since the U.S.-Japan security agreement was signed in 1951, Japan has never reacted so harshly to an American president or president-elect. It is unprecedented as Japan considers the United States as sharing a common destiny and the U.S.-Japan alliance the basis for its security. It is unusual indeed. Japan seems to believe it is the biggest victim of “America First” isolationism.

More specifically, the institute proposed owning cruise missiles to strike back when Japan is attacked and increase defense spending from current 1 percent of GDP to 1.2 percent.

Others propose a new U.K.-Japan alliance to prepare for the Trump variable by siding with the United Kingdom, which shares a similar geopolitical situation. Prime Minister Shinzo Abe is making diplomatic efforts. He toured four Asia-Pacific nations, urging Trump to return to Asia. He is asking Trump to inherit the Obama administration’s “Pacific pivot” policy to check China’s aggressive expansion.

Japan is in a dilemma. It cannot follow nor beat Trump. Korea’s situation is not much different. The world has changed drastically twice — first after the 9/11 terror attacks and the U.S.-led war against terrorism, and then with China’s rise. Trump’s peace and prosperity for America may change the world again. We need to thoroughly prepare for the Trump risk.


*The author is Tokyo bureau chief of the JoongAng Ilbo.