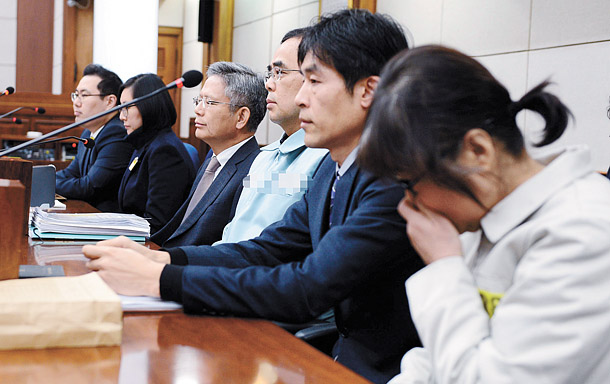 Jang Si-ho, second from left, and Choi Soon-sil, far right, sit in the dock for their trial over abuse of power scandal at the Seoul Central District Court on Tuesday. [YONHAP]

The independent counsel announced Tuesday a plan to question President Park Geun-hye by early next month as part of its investigation into the abuse of power scandal that led to her impeachment.

Independent counsel Park Young-soo launched an ambitious probe last month to investigate a series of criminal charges against the president and her inner circle including alleged bribery involving corporate giants including Samsung Group. After identifying Samsung Electronics Vice Chairman Lee Jae-yong, the third-generation leader of Korea’s largest business group, as an alleged bribe giver, the team made clear that its next target is the president, an alleged recipient.

“We believe it must take place by early February at the latest,” independent counsel spokesman Lee Kyu-chul said Tuesday during a press briefing when asked about when a questioning of Park will take place. “We have yet to contact her side to make arrangements.”

The independent counsel is zeroing in on the allegation that Lee gave bribes to Park through her longtime friend Choi Soon-sil in return for the president’s help in solidifying his control of Samsung. Park was suspected of putting pressure on the state-run National Pension Service to support a merger of two Samsung units in 2015 in return for the conglomerate’s generous support of Choi and her family and donations to two foundations controlled by Choi. Samsung paid or promised to pay a total of 43 billion won ($36.6 million).

Because the independent counsel said most of the conglomerates’ donations to the foundations - a total of 77.4 billion won - can be seen as bribes, the amount of suspected bribes that Park received could amount to over 100 billion won. It remains to be seen if any questioning of Park will take place. If she refuses to cooperate, there is no way to compel her.

Meanwhile, a key suspect in the scandal pleaded guilty Tuesday to assisting Choi in extorting money from Samsung and GKL, an affiliate of the Korea Tourism Organization. She is Jang Si-ho, a niece of Choi.

The Seoul Central District Court is holding a trial in which Choi, Jang and former Culture and Sports Vice Minister Kim Chong are charged with colluding to coerce the two companies to sponsor a winter sports education center created under Jang’s name.

During her trial, Jang admitted colluding with Choi and Kim to coerce Samsung to sponsor the center, established in June 2015, with more than 1.6 billion won in donations.

Choi, however, has denied all the charges against her. Her lawyer said Jang first proposed the project to educate elite winter sports athletes, and Choi gave some advice and support for her niece’s plan.

While Choi insisted that Jang had appointment and budget powers over the center, the prosecution said Choi was actually above Jang in the hierarchy. Jang also identified herself as a “housewife” and denied that she was the operator of the center.