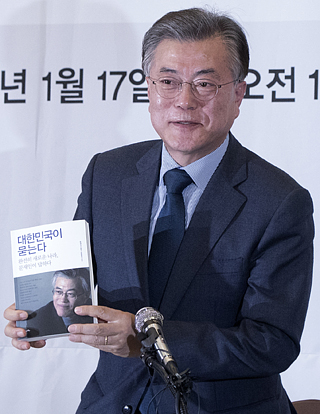 Moon Jae-in, former chairman of the Democratic Party, holds a press conference in the Seoul Press Center on Tuesday, marking the publication of his latest book. [YONHAP]

Presidential frontrunner Moon Jae-in of the Democratic Party, formerly the Minjoo Party of Korea, reiterated his position on Tuesday on the deployment of the U.S.-operated antimissile defense system, saying the decision should be deferred to the next administration and it requires a thorough public discussion on the merits and disadvantages of having it in the country.

During a press conference on Tuesday in Seoul, marking the publication of his latest book, whose title can roughly be translated as “Korea Asks and Moon Jae-in Answers How to Create a Whole New Country,” Moon said he was open-minded about the issue, which has drawn sharp protest from Beijing with warnings of economic retaliations.

Moon has recently been under fire by those in his own party for his change from objection to support for the deployment of the Terminal High Altitude Area Defense (Thaad) system, in what is seen as a tacit admission that the deployment is inevitable since it was a bilateral agreement with Washington, Seoul’s longstanding ally.

“I do not have a particular position on the Thaad issue,” said the former DP chairman. “What I am asking is that we first discuss the issue and then make diplomatic efforts (to alleviate protests from neighbors) and then decide what to do.”

Moon’s remark echoes what he said in his latest book, in which he said Seoul should ask Beijing to rein in Pyongyang’s nuclear program by demanding North Korea freeze all nuclear activity while indicating it would have no choice but to follow up the Thaad agreement with Washington otherwise.

But his open position on Thaad can be subject to criticisms from both the conservatives, who want the Thaad deployed, and liberals who are against it.

On former UN Secretary General Ban Ki-moon, who is expected to declare his bid for presidency in the coming weeks, Moon said he would be better in diplomacy than Ban as head of state because the lifelong diplomat was “too pro-U.S.”

Moon said, “He is too pro-U.S. and will never be able to say ‘no’ to Washington.”

Moon added that while he could also be considered pro-U.S., he would turn down the ally’s demands when necessary. “In the international community, the balanced comprehensive diplomacy is now considered an invaluable asset and therefore we need to recruit talents and come up with policies to follow such a trend.”

On resolving the nuclear gridlock with Pyongyang, the former human rights lawyer said he would even go to “hell” if it could help him untangle the issue with no sign of progress. On that note, he said he would choose Pyongyang over Washington in his first overseas visit as president if elected to resolve the nuclear impasse.