Thae: More diplomats have defected to South than reported

Thae: More diplomats have defected to South than reported 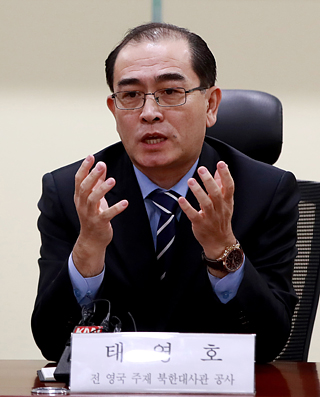 Thae Yong-ho speaks at a conference in the National Assembly on Tuesday. [YONHAP]

A former North Korean diplomat in London who defected to Seoul last year said Tuesday a large number of his fellow diplomats have recently fled to South Korea, even though such flights have not been made public.

“A significant number of diplomats came to South Korea,” Thae Yong-ho told a conference hosted by the conservative Bareun Party which will be formally launched this month. “Even now, there are a number of (North Koreans) waiting to head to the South.”

“There will be an increase in the number of elite-class defectors seeking a better life,” he added. “I am the only high-ranking official whose identity has been revealed to the public. South Korean media do not know but North Korean diplomats are all aware of it.”

Thae also called for preparations for a people’s uprising to topple the Kim Jong-un regime to forge lasting peace and stability on the peninsula.

“We should spark an uprising through an influx of outside information,” Thae said, adding that sanctions against Pyongyang should be maintained.

“We need to bolster pressure on the human rights issue. While keeping sanctions, there should be private-level exchanges, and steps taken to separate the North Korean regime from its people,” he said.

Thae said less than 20 percent of the foodstuffs provided to North Korea actually reach the people, and claimed there should be efforts to make them realize that the South has made donations.

“Giving them (aid) for free will only solidify the North Korean regime and its development of nukes,” Thae argued.

The former diplomat said North Korea aims to develop nukes as it considers the South an object to be destroyed, rather than a counterpart of coexistence.

On the controversial deployment of an advanced U.S. missile defense system in South Korea, Thae said the measure is needed for protection, adding the move should not be influenced by neighboring countries.

China and Russia have been protesting against the deployment, expressing concern over the increase of the U.S. presence in the region.

He described North Korea as just a slave society that serves the Kim hereditary monarch, not a genuine communist country.

“The concept of a proletarian dictatorship is long gone in North Korea. It has instead become a single gigantic slave society that exists only for the Kim family,” Thae said at the National Assembly.

Thae claimed Kim Jong-un is facing challenges as, unlike his father, he did not have enough time to prepare for the succession of power.