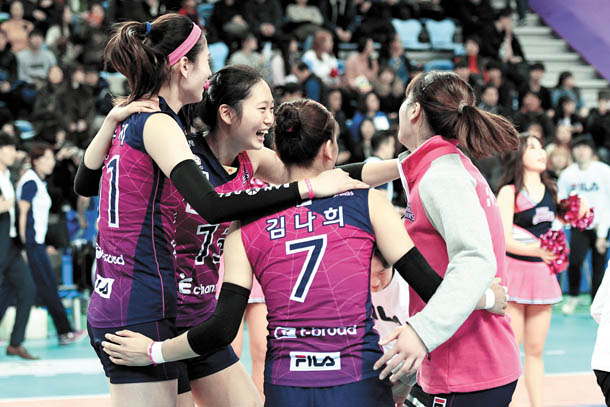 Kim Su-ji, a middle blocker for the Heungkuk Pink Spiders, goes for a kill during a match against IBK Altos on Tuesday. [ILGAN SPORTS]

Two sisters, Kim Su-ji and Kim Jae-young, were laughing after the conclusion of the match between the Heungkuk Life Pink Spiders and the IBK Altos at the Gyeyang Gymnasium in Incheon on Tuesday. This was the first time they grabbed a victory together in the same uniform, an unforgettable day for the Kim sisters.

On that day, the professional women’s volleyball team, the Pink Spiders, struggled against their opponents, the Altos, in the absence of their star setter, Cho Song-hwa, who suffered a knee injury recently.

“More than winning, I thought of continuing with high spirits,” said Park Mi-hee, the head coach of the Pink Spiders. However, the Pink Spiders won by a set score of 3-1 and kept their lead in the league standings with a total of 14 wins and five losses. The gap between the Pink Spiders and the Altos, who have 11 wins and nine losses, became wider.

Kim Jae-young, who has been absent from the court the entire season, filled in for Cho on Tuesday. Although the setter struggled to put up any notable plays with left wing spiker Lee Jae-young, Tabitha “Tabi” Love, a right wing spiker, was up for the task. 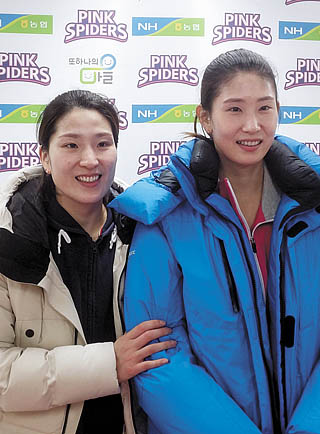 The 29-year-old Kim Jae-young hails from a volleyball family. While her father, Kim Dong-ryeol, coaches Wongok high school team, her mother, Hong Seong-ryeong, was the former coach of Wongok Middle School. Both of them were volleyball players in their prime. Her older sister Kim Su-ji was no exception.

In the 2006-07 draft, Kim Jae-young was third pick in the first round, chosen by Hyundai E&C Hillstate and joined her sister who set out in the V-League a year before her.

Unlike her sister Su-ji, who played for the Korean national team and proved herself with string of victories in the V-League, Jae-young did not bloom as a pro.

Though she played in 22 matches for two seasons, she spent more time on the bench than on the court. She completely disappeared from the court since the 2008-09 season and after three seasons without any playing time, the setter decided to retire from the sport.

However, it didn’t take long for her to return to the court.

“My [older] sister would say ‘let’s play again,’” Kim said. “Within days, my mom came down to Australia and I packed my bags home in less than a week.”

The Pink Spiders, who had struggled finding a proper talent for setter, welcomed her with open arms. “[Jae-young] was on a champion team, and during high school too she was a champion,” said Park. “More than anything, we chose her because of her boldness on the court. I also considered her experience.”

Returning to the V-League after several years of absence, Kim did not step foot on the court during the first round. However, she was the first alternate after the starter. Re-acclimating herself slowly, she started to see more playing time by round two. When opportunity presented itself to her, she did not miss it.

“There were only one or two times where I played for a full set after returning to [professional volleyball.],” said Jae-young. “It was a huge burden to maintain our lead in the standings, [especially] with our opponents being IBK, we thought of focusing on utilizing our spikers and blocking was lower on our list of priorities. I gave my all to not be clumsy. I played without any thoughts during the match, but I’m happy we won.”

Her older sister watched over her. “My [older sister] told me what to do in detail,” said Kim.

When her older sister Su-ji was asked on how she would rate Jae-young’s plays, she said, “Because [we] won the match, I would give her 90 points. However, judging her just by her toss, I would give only 60 points. In her ball distributions, she made some absurd plays. Then again, it was better than I had expected. I just hoped that she would take advantage of the opportunity.”