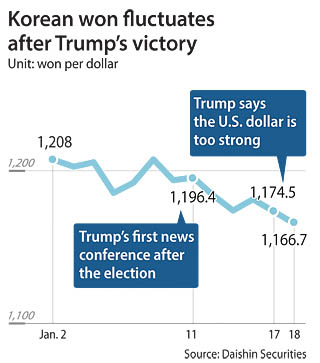 As the inauguration of Donald J. Trump draws near, the president-elect’s unpredictable comments are having an increasingly volatile effect on Korea’s foreign exchange market.

His latest remark that the dollar was “too strong” sent the Korean won soaring to a one-month high against the greenback on Wednesday. The Korean currency closed at 1,166.7 won on the dollar, down 7.8 won compared to the previous trading day.

In an interview with The Wall Street Journal on Monday, Trump said the U.S. dollar’s value is too high, especially as China is holding down its own currency. “Our companies can’t compete with them now because our currency is too strong. And it’s killing us,” Trump said in the interview.

With just one day left until Trump’s inauguration, January saw the highest range of fluctuation in two years on the won-to-dollar exchange rate. The average fluctuation was 8.5 won between Jan. 2 and 17, compared to December’s 4.0 won.

“The exchange rate will show steep ups and downs depending on Trump’s policy,” the analyst added. “Still, the drastic shift toward a weak dollar is unlikely since Trump has limited options to manage the performance of the dollar.”

Jeon noted that the won’s appreciation last week between Wednesday and Friday came from investor disappointment in Trump’s first news conference on Jan. 11.

Ha Keon-hyeong, an economist at Shinhan Investment, projected the won will continue to strengthen against the dollar. “Easing hard Brexit concerns and improving risk appetite also place downward pressure on the [won-to-dollar] rate,” he said. “However, the risk should be mitigated by the burden of the recent plunge and caution ahead of major events such as Fed Chair Janet Yellen’s speech [on Wednesday, local time] and Trump’s inauguration.”