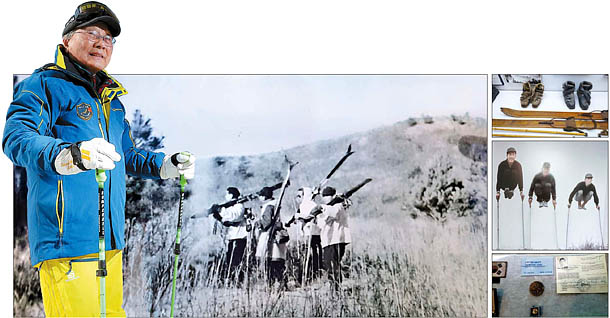 Im Gyeong-sun stands at the Konjiam Ski Resort in Gwangju, Gyeonggi. In 1950, to ski at Daegwallyeong-myeon, he had to walk up the mountain. Right, his ski boots and Olympic AD card. [KIM KYUNG-ROK]

In February 1960, Korea sent one alpine skier and one cross country skier to participate in the Eighth Winter Olympics held in Squaw Valley, California, for the first time in history.

Born in Sariwon, Hwanghae Province, Im Gyeong-sun and his family moved to Manchuria when he was seven. That’s when he first encountered Japanese skis. After Korea’s liberation in 1945, and once his family settled in Seoul, Im taught himself to ski.

In 1960, at age 30, Im Gyeong-sun participated in three alpine Winter Olympic events: downhill, slalom and giant slalom skiing. Just like the movie “Cool Runnings,” the true story of the Jamaican national bobsleigh team’s debut during the 1988 Winter Olympics, Im had to start from scratch.

He trained at a ski resort that didn’t have a cable lift and barely got to participate in the event by borrowing someone else’s skis. He received minimum support since Korea had just emerged from the Korean War (1950-1952).

Im was praised by Sports Illustrated as an “Olympic hero.” In the article, “Courage and Hope,” Im was portrayed as “a true Olympian” for challenging himself to ski Olympic courses without any proper training, support system or experience.

Today, an exhibit of Im Gyeong-sun’s Olympic story has been erected at the entrance lobby of Konjiam Ski Resort.

As the honor principal at the Konjiam Ski School, he tries his best to coach young skiers as much as possible.

Q. What was the ski resort facility like then?

A. To get to the ski resort, we had to walk through the mountain to Daegwallyeong-myeon. Once we arrived, we stood abreast and stomp down the slope so we could ski. Ski resorts at that time did not have cable lifts we can ride on. By the time I walked up the hill, I didn’t have any energy to produce speed coming down the slope.

Did you have ski boots and poles?

Why did you use someone else’s ski at the Olympics?

Since South Korea was not yet ready to establish diplomatic relations with Japan, I was unable to purchase my equipment and was also denied entry to Japan although I had the International Olympic Committee AD card. When the General Manager of the U.S. National team heard about my story, he offered to lend me his equipment.

Was it hard to participate in the event with the skis you trained in?

I used Japanese skis made of cherry blossom wood, which did not have an edge. The tree edge that I cut was used as an edge, but as I skied more and more, that edge was no longer sharp. Instead, it became circular. With a circular edge, every time I tried to change direction, I would slip one to two meters (6.6 feet).

How were the borrowed skis?

The edges were very sharp. When I braked, it made very sharp stops. Also, my body bounced off from rebounds. When I was at the medical dispensary due to injury, Shin Up-jae, president of Korea Ski Association at the time came to me and said “you can’t be laying here.

“You need to ski so more Korean skiers can participate in the Olympics next time.” I went back out as soon as I heard that.

It was hard to control the edge and there were multiple times where I almost tripped. I was able to finish 40th because a number of skiers got disqualified.

But facilities, equipment and the support systems have gotten so much better today than before. Skills and experience are important, but confidence is the most important factor.