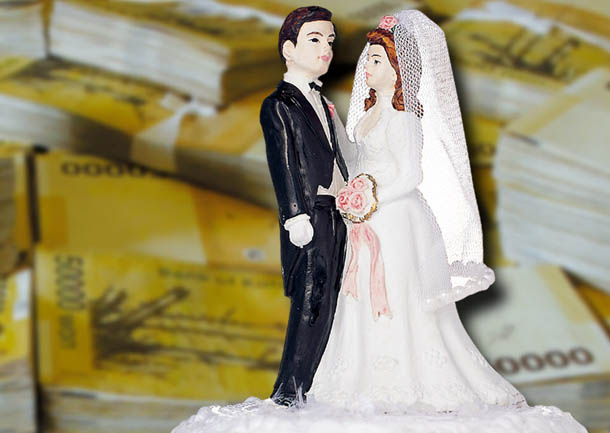 “It’s frightening,” a senior reporter said after reading an article on the front page of JoongAng Sunday last week. A study on men in their 30s shows that high-income earners tend to get married more than those in the low-income group. The haves get married while the have-nots cannot afford to do so.

In fact, we’ve all known the truth. We’ve seen such cases around us so often. Nevertheless, it is shocking to see a specific survey result showing the harsh reality that money is a decisive factor for love and marriage, the biggest source of happiness for individuals.

Being in my mid-40s, I have friends, both male and female, who are still unmarried. Of course, some of them have good jobs and make good money yet are still single because of some unfortunate relationship issues. Yet most failed to tie the knot because they have no stable employment.

Choi Soon-sil’s power abuse and President Park Geun-hye’s ridiculous incompetency ignited candles across the country, but what fanned the flames was the financial deprivation. In the past, only a small portion of Koreans in their 30s were single. But this is sure to grow as the Korean economy is sluggish and growth is stagnant. Unless the reality of money deciding marriage is improved, the future of Korean society is hardly bright.

It is unclear how the independent counsel’s investigation of the president and conglomerates will end. Companies claim they had to submit to the president’s will and ask why they are the scapegoats in this media circus. They complain that the counsel’s probe is populist. But the voices calling for conglomerates to reform will most likely influence the investigation of the special prosecutor.

An insider of a conglomerate asked, “What can we do to change public opinion?” Companies are not charities, and social contributions cannot be expanded excessively. The prime purpose of business is the pursuit of profit and continued operation. I have to tell him, “the answer is jobs.” As the economy struggles, wealth is concentrated to conglomerates and their owners, so companies need to work to reduce the reverse trickle-down effect.

Adding more jobs at big corporations won’t reduce the wage gap between conglomerates and small and mid-sized businesses. Large companies should make real efforts to improve conditions for non-salaried workers, outsourced workers and contractors. Irregular workers and contractors had to suffer as conglomerates cut costs and increased profits. It’s about time they also share the gains.