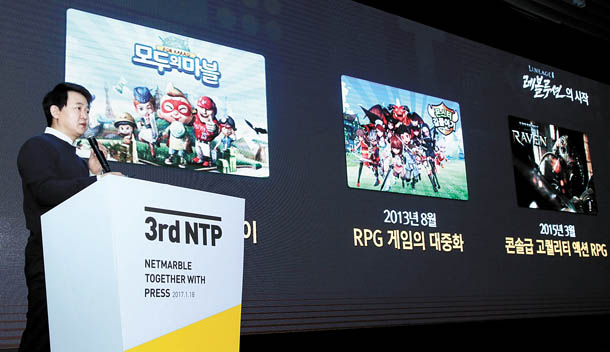 Online game giant Netmarble has a blockbuster hit in Lineage 2 Revolution, a mobile role-playing game it released a month ago.

At a press event on Wednesday, the company revealed that it took just two weeks for the mobile RPG to rake in 100 billion won ($86 million) in revenue, beating the record of Netmarble’s previous hit, Raven, by a week. The game has registered accumulated revenue of 206 billion won in just one month and remains the most popular mobile game on app stores in Korea.

The performance is comparable to records seen in key game markets such as the United States and China, according to CEO Kwon Young-sig.

Buoyed by the success, Bang Jun-hyuk, the founder and chairman of the company, said the game developer would expand more actively into the world’s three biggest game markets - the United States, China and Japan - this year.

“We will globalize mobile RPGs as a representative of Korea,” he said, vowing to “localize” for respective markets. Seventy-two percent of global mobile game revenue comes from these three countries, he noted.

“If the situation doesn’t work favorably with you, you can tackle the problem by changing it,” Bang said. “We will make RPGs designed for players in China and Japan and pioneer a niche market in the United States and Europe.”

He admitted that Netmarble, best known for games like Everybody’s Marble and Seven Knights, lacks recognition and experience in the West and that players there tend to prefer strategy games to RPGs. For this reason, the company plans to take advantage of global intellectual properties. Its move in December to buy a majority stake in U.S. rival Kabam is part of its global push.

Netmarble is preparing to list on the Kospi in the first half of this year. The plan received a green light after it passed the Korea Exchange’s preliminary eligibility review last month. In its September application, the company said it would issue about 67.8 million shares, with 27.6 million shares locked up for six months.

Netmarble posted estimated revenue of 1.5 trillion won and 292.7 billion won in operating profit last year. About 51 percent of the revenue comes from markets outside of Korea.

Founder Bang is a legendary figure in the game industry. A high school dropout with keen foresight, he helped build Netmarble into the nation’s second-largest game developer by revenue after Nexon. He said investors should look into the company for its growth potential and sustainability.

“We have been consistently bringing hit games to the market and posted over 60 percent annual growth in revenue,” he said. “As far as I know, I don’t know any other company with such a record.”