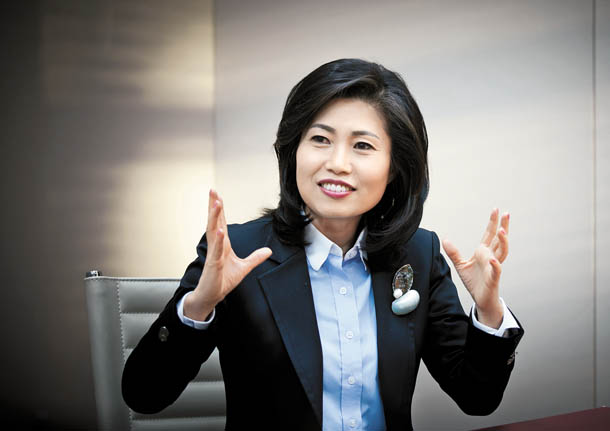 Han Kyung-hee has been the epitome of the self-made businesswoman, a rarity in Korea, notorious for having the smallest proportion of female executives in the corporate sector among all OECD members.

Mirae Science, better known by its former name Haan Corporation, has had several hit products since launching in 1999, including its flagship floor steamer.

At one point, it posted annual revenues of as much as 100 billion won ($85.71 million). Han went on to become the co-head of the Korean branch of the Women Corporate Directors Foundation after it launched here last September.

So it came as a surprise when it was belatedly announced that Han’s company went into a debt workout program late last month amid a capital shortage, sending shockwaves into the community of small- and medium-sized enterprises.

The Industrial Bank of Korea, Mirae Science’s main creditor, reported to the Financial Supervisory Service on Dec. 28 that it would embark on a work-out procedure and is conducting due diligence with an accounting firm.

When the process is over in March or April, IBK and several other creditors to which Mirae Science owes a combined 25 billion won - Woori Bank, KEB Hana Bank and Korea Technology Finance Corporation - will gauge the potential for Mirae’s recovery and decide on whether or not to proceed with an actual debt work-out.

IBK is optimistic at this moment.

“We will first need to closely look into the company but the chance of its normalization seems high, given the CEO has the will to bring the company back to normalcy. Also, the company’s situation has been aggravated because of a failure in investment rather than in sales,” said an IBK official.

“Aggressive overseas investment resulted in losses,” said Han in a recent phone interview, “and the situation worsened as we stuck to the principle of maintaining the lowest price for each product in the industry, which inevitably led to lower margins.

“The numbers on the books aren’t that good but we are not in the worst situation,” she said. Bad debt occurring in the U.S. operation was a particular strain, she said.

But she made clear that the company’s decision on the workout was to “refurbish the financial structure,” and stressed the company is far from any danger of going under.

“Even Donald Trump was bankrupt four times but he kept up with his businesses and eventually became president of the United States,” she said.

Han added that the company continues to carry on with business as usual, including after-sales service, and a big export deal is imminent in Southeast Asia.

The 53-year-old began her career at the International Olympics Committee in Switzerland after graduating from Ewha Womans University with a major in French and literature in 1986. Quitting after two years, Han earned an MBA from UCLA and later worked at several companies in the United States. She returned to Korea to join the Ministry of Education through a special recruiting process in the late 1990s.

As a working mom, she hit upon the idea of inventing a floor steamer while cleaning her own house. She launched her company in 1999 and rolled out the first steamer in 2003. The product was a blockbuster, selling 10 million units in just a decade.

The company reached its peak in 2009, when it posted 97.6 billion won in revenue and 8.8 billion won in operating profit, but has been in a downward slide since.

Han diversified the company’s portfolio with an array of other consumer appliances from food garbage processors to rice cookers, ironing steamers and water purifiers and even branched out into furniture and cosmetics. But revenue has been flagging.

“Even if a small- and medium-sized company has success with a product, it could be ultimately surpassed by larger rivals with brand power or imitators that come up with a lower price tag,” said Lee Kyung-mook, a professor at the Seoul National University’s Business School. “You have to cope with changes in the market situation by fostering sustainability. If you grow anxious about expanding the business, you will reach a limit.”

Han’s company entered the United States in 2007 though QVC, an American cable and broadcast shopping network, selling 5 billion won worth of steam-related home appliances the next year. The volume sold last year is valued at 18 billion won.

Han says she won’t give up. The company is gearing up to roll out innovative products in the near future, she promises. One is a grill oven range entirely free from harmful electromagnetic waves to compete with microwaves. The product is set to launch by the end of this year.