Renault Samsung picks up the pace on premium

Renault Samsung picks up the pace on premium 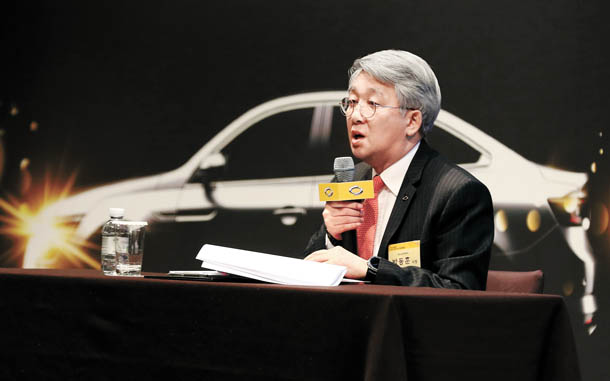 Renault Samsung Motors CEO Park Dong-hoon announces the automaker’s goals for the year at a press conference in Seoul on Wednesday. [YONHAP]

Renault Samsung Motors has ambitious plans this year to sell 270,000 cars globally and become the third-largest Korean automaker in the country in terms of sales.

To achieve its goal, the company said extending the sales momentum of its best-selling premium vehicles, the SM6 and QM6, is essential.

“Renault Samsung plans to sell about 120,000 cars domestically and another 140,000 abroad,” CEO Park Dong-hoon said during a press conference on Wednesday in Seoul, where he listed some of the company’s key goals for the year.

“Releasing a new model every five years is something that is impossible for Renault Samsung,” he said. “Sustaining the popularity of the SM6 and QM6 is something every employee of our company is figuring out right now.”

The laudable growth largely came from the popularity of its two premium models: the midsize SM6 sedan launched in the first half of last year, and the QM6 sport utility vehicle launched in the second half.

The SM6 was the best-selling midsize sedan last year, outperforming Hyundai Motor’s Sonata and GM Korea’s Chevrolet Malibu. There were 57,478 SM6 vehicles sold last year, exceeding the initial objective of 50,000. It was named the car of the year by the Korea Automobile Journalist Association.

“Going for a premium model was a risk at first,” Park said. “But both models’ success gave us the confidence that we can do away with making cheap cars.”

Renault Samsung found that around 60 percent of its QM6 buyers chose the more expensive four-wheel drive option and 52 percent picked the most premium trim.

In line with its premium focus, Renault Samsung said it would revamp its existing showrooms and dealerships to provide a more luxury vibe. It is also considering expanding the number of dealerships, acknowledging the rising demand for their cars.

“Before, I didn’t think it was right to expand the number of shops because it would jeopardize the profitability of existing dealerships,” Park said. “However, now I think it is more right to increase the number to let potential consumers buy the car more easily.”

In addition to fortifying the existing lineup, Renault Samsung has two new cars coming up, both of which don’t fall in the typical volume model segment. Rather, both cars will help give Renault Samsung a more future-oriented image.

First up is the hatchback Clio model, which Renault Samsung is planning to introduce in the first half of this year. Next is the compact electric vehicle Twizy, which can accommodate a maximum of two people.

Considering the unique features of the Twizy, Renault Samsung is going to test them out through business-to-business trades first and then consider wider release. “The Twizy is a car that has never existed in the Korean market before,” Park said. “I think it is going to suggest a direction where Renault Samsung has to go in the future.”

Park also discussed the Korean automaker’s ambitions to raise its status in the Renault-Nissan Alliance in the future. After the successful 2008 launch of the QM5, which the Korean unit took part in developing, a majority of Renault’s SUV R&D has been taking place at Renault Samsung’s research center in Yongin, Gyeonggi. Last December, the research center was officially designated to take full charge of the French auto group’s entire SUV lineup.

“I am aware that Renault Group is considering delegating [us] the job of developing future car technology, such as those related to electric cars, autonomous driving and connected cars,” Park said, “because Korea is far ahead regarding the matter compared to European countries.”