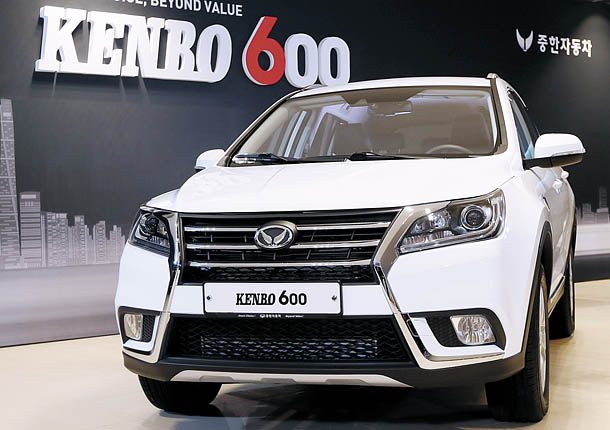 China-Korea Motor’s Kenbo 600 making its debut at the company’s headquarters in Incheon on Wednesday. It is the first Chinese vehicle that will be sold in Korean market. The SUV’s prices range from 19.99 million won (17,138 dollar) to 20.9 million won. [YONHAP]

A Chinese SUV, the Kenbo 600, made its debut in Korea on Wednesday, becoming the first Chinese passenger vehicle to be marketed in the country.

China-Korea Motor, the local importer and distributor of the Chinese vehicle, unveiled the Kenbo 600 in a ceremony held at its Incheon headquarters, just west of Seoul.

The Kenbo 600, marketed as the S6 in China, is an SUV produced by BAIC Motor Corp., the passenger car-making unit of China’s state-owned BAIC Group, the fourth-largest automotive group in China by output.

The Chinese automaker sold more than 40,000 units of the vehicle in China last year, and exports the SUV to some 20 countries.

The local importer of the Chinese vehicle has been taking preorders, with deliveries set to begin at the start of next month, a company official said.

The local importer of the vehicle said customers will be able to get after-sales service at 80 shops across the country, adding that it plans to launch more passenger vehicles down the road.

China-Korea Motor aims to sell 3,000 units of the vehicle here this year, and plans to unveil electric cars next year.’

Meanwhile, Chinese electric vehicle maker BYD Co. set up a corporate body late last year in Korea, heralding its full-fledged operation in the country in the near future.

BYD has been seeking to expand its presence in Korea through a business partnership. The Chinese EV maker is also seeking to sell its cars at various dealers here, industry sources said.