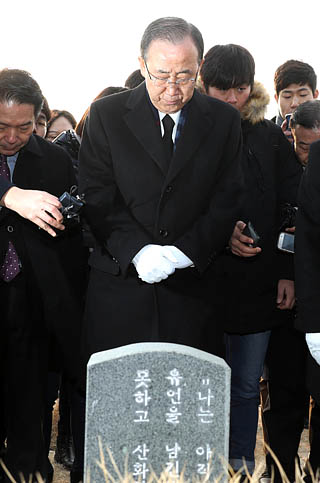 Former UN Secretary General Ban Ki-moon pays tribute on Wednesday at the altar for the victims of the 1980 Gwangju Massacre. [YONHAP]

Despite a weeklong national promotion tour apparently aimed at boosting his presidential prospects, former UN Secretary General Ban Ki-moon’s approval rating has taken a fall, widening the gap with frontrunner Moon Jae-in of the Democratic Party, according to the latest poll.

Ban, who returned home last Thursday, has since been on a national tour, visiting places that bear social and historical significance in an apparent aim to rally support, though he is yet to formally declare his presidential bid. Despite this, his approval has actually dropped from a week earlier from 22.2 to 20 percent, with the percentage gap between Ban and Moon now rising to 11.4 percent from 3.9 percent the previous week.

In a poll conducted by Hankook Research of 1,000 adults nationwide from Sunday through Monday, Ban came in second with 20 percent, behind Moon’s 31.4 percent. In a previous survey conducted from Monday through Friday last week, Moon led with 26.1 percent to Ban’s 22.2 percent.

Seongnam Mayor Lee Jae-myung of the Democratic Party ranked third with 9.5 percent, followed by Ahn Cheol-soo of the People’s Party with 4.8 percent.

The latest poll could prove particularly hurtful for Ban as it shows his extensive tour schedule over the past few days, from a naval base in Gyeonggi to see the wreckage of the Cheonan warship to the gravesite of the late liberal icon and former President Roh Moo-hyun, did nothing to elevate his standing as a presidential hopeful.

Moon led Ban in all regions except Daegu and North Gyeongsang, arguably the country’s most conservative area. Even in Chungcheong, where Ban is from, Moon was ahead 26.1 to 23 percent.

Speaking before his supporters and reporters upon his arrival last Thursday, Ban proclaimed he would strive to bring about national unity and narrow ideological divisions in the country troubled by the Choi scandal that led to President Park Geun-hye’s impeachment.

On that note, Seoul’s former top diplomat tried to strike a balance by visiting places that bore significance both to conservatives and liberals.

To win the support of conservatives, he visited the exhibition of the Cheonan warship at the Navy’s 2nd Fleet Command and said the country is in a quasi-state of war with Pyongyang, defending the decision to deploy the U.S.-made antimissile defense system.

To appeal to liberals, he visited the gravesite of former President Roh two days later in Gimhae, South Gyeongsang, proclaiming he would uphold the legacy of the late president.

Ban’s efforts to win the hearts of the two groups, however, turned out to have been largely in vain.

Ban’s frank remarks during a meeting with reporters on Monday, in a departure from what has been known as his so-called slippery-eel manner, a mocking description of the way he speaks in formal surroundings to avoid sensitive topics, also are thought to have hurt him.

He said he would have chosen the ruling Saenuri Party to run in the primary had it not been split by the defection of 30 lawmakers, who later formed the Bareun Party. This remark reinforced the perception that he had nurtured a relationship with President Park in the hopes of running on the Saenuri ticket, but changed his mind after the current scandal broke.

“Ban’s fall in approval was well predicted,” said an insider at the minor opposition People’s Party, who asked not to be named. “He has no experience in politics. He won’t survive, that I guarantee.”