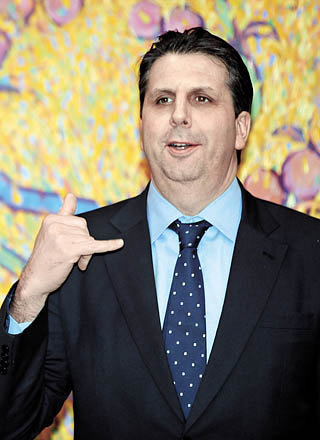 Korean Foreign Minister Yun Byung-se and U.S. Ambassador to Seoul Mark Lippert had their final meeting and dinner on Wednesday, as the American envoy heads back to Washington Friday to coincide with Donald J. Trump’s inauguration as president.

Yun and Lippert were scheduled to meet at the annex government complex building located in central Seoul Wednesday afternoon, according to the Ministry of Foreign Affairs, and then have the farewell banquet at the minister’s residence accompanied by their wives at 7 p.m.

The menu for the farewell dinner was traditional Korean food.

Lippert has sampled various examples of traditional cuisine as he traveled the country during his sojourn here as ambassador, including Sokcho-style dakgangjeong, or sweet crispy chicken, chimaek, or chicken and beer, in Daegu and samgyetang, or ginseng chicken soup.

The Korean government also plans to present Lippert with the first-class Gwanghwa Medal of the Order of Diplomatic Service Merit, though it may not be presented to the ambassador before his departure.

Trump, in an unusual move, has summoned U.S. ambassadors overseas to return home by his inauguration on Friday, thus Lippert has to return earlier than anticipated.

A foreign affairs official said, “We will deliver the medal to him afterward by any means possible.”

Yun called Lippert the best U.S. envoy to date. Lippert, known as being a close friend to President Barack Obama, arrived as the youngest U.S. envoy to Seoul in October 2014 with his wife Robyn.

The Lipperts gained public popularity as the couple was often spotted strolling the streets in downtown Seoul with their basset hound, Grigsby, visiting family-style Korean restaurants, and reaching out to young Koreans through Twitter and a blog account.

The pair also saw two new additions to the Lippert family with the birth of their son, James William Sejun, in 2015 and daughter, Caroline Saehee, in November.

Perhaps the darkest hour during Lippert’s post in Seoul was when he was attacked by a radical activist with a knife and cut in the face and arm during a breakfast forum on March 5, 2015.

As a result, he received 80 stitches in his cheek. However, Lippert took the opportunity to emphasize again the strength of the Korea-U.S. alliance.

Lippert also spent Wednesday visiting the May 18 Memorial Park in Gwangju, which commemorates the 1980 democratic uprising and massacre during the authoritarian Chun Doo Hwan regime.

He said he would like to work to promote relations between the United States and the city, even when he returns home.