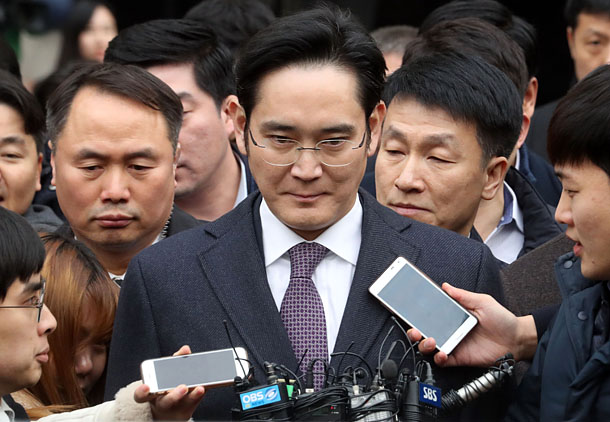 Facing his fate — Lee Jae-yong, center, vice chairman of Samsung Electronics, leaves after attending a court hearing to review a detention warrant request against him at the Seoul Central District Court on Wednesday. Independent counsel Park Young-soo asked the court on Monday to issue a warrant to detain Lee on charges of bribing Choi Soon-sil in return for the president’s support of a controversial merger at the country’s largest conglomerate. The court is expected to make a decision on the issuance of the warrant overnight. See story on Page 2.[YONHAP]

Samsung leader Lee Jae-yong had a four-hour legal battle on Wednesday to resist the independent counsel’s plan to detain him as part of an investigation into his alleged bribing of President Park Geun-hye through her controversial friend.

Independent Counsel Park Young-soo asked the Seoul Central District Court on Monday to issue a warrant to detain Lee, vice chairman of Samsung Electronics, on charges of bribing Choi Soon-sil in return for the president’s support of a controversial merger at the country’s largest conglomerate. He was also accused of embezzlement and perjury.

A warrant hearing started at 10:30 a.m. on Wednesday at the Seoul Central District Court. Judge Cho Eui-yeon presided over the session, and the independent counsel team sent four prosecutors to prove the charges and argue the need to detain the suspect. Samsung sent six lawyers, including a former judge Moon Kang-bae and a former prosecutor Lee Jeong-ho, to refute the arguments.

The independent counsel stressed that it is crucial to detain Lee because it wants to further question him about how he raised the funds to bribe Choi. It said embezzled corporate funds were used as bribes and Samsung may destroy evidence by forging its accounting records.

The 48-year-old de facto CEO of Samsung is a suspect in an alleged bribery scheme involving Park and Choi. He was questioned by the independent counsel for 22 hours last week over allegations that Park put pressure on the state-run National Pension Service to support a merger of two Samsung units in 2015 in return for the conglomerate’s generous support of Choi and her family and donations to two foundations controlled by Choi.

The merger between Samsung C&T and Cheil Industries in July 2015 played a key role in the third-generation transfer of control of Samsung by solidifying Lee’s grip on Samsung Electronics. He was accused of having paid and promised to pay a total of 43 billion won ($36.4 million) in bribes using Samsung’s money.

During the hearing, the two sides argued most fiercely about whether Lee should be seen as a bribery suspect. Deciding on the nature of Samsung’s conspicuously generous donations and sponsorships to Choi and her family is expected to be key in the court’s deliberation. While the independent counsel said Samsung willfully paid Choi, Samsung said it was coerced by Park to offer financial support to her friend. After the warrant hearing, Lee was sent to the Seoul Detention Center to wait for the judgment. The ruling on the warrant was expected to be made late last night.

Under Korea’s criminal laws, a pre-trial detention warrant can be issued by a local court at the request of prosecutors. The warrant allows a suspect to be held by police or prosecutors for up to 10 days for questioning. Prosecutors have the option to seek a 10-day extension of pre-trial custody before a suspect has to be charged.

The criminal litigation law also says that someone accused of a crime can be detained to prevent flight or destruction of evidence. A suspect can also be detained when he or she does not have a verifiable residence.

Prosecutors’ attempts to detain suspects during investigations have long been a source of controversy in Korea. Legal experts and rights advocates said pre-trial detention is often abused to expedite investigations, as prosecutors often rely on confessions to secure guilty verdicts. They also showed concerns that detention is often used as a form of punishment in high-profile cases.