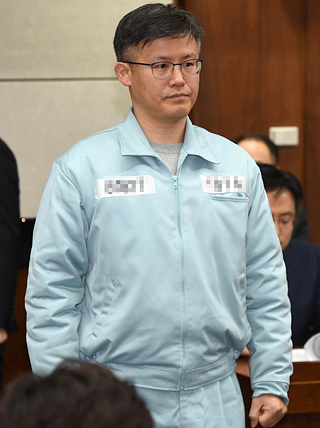 The Seoul Central District Court held a second hearing in the trial of Jeong Ho-seong, an aide to the president since 1998, who is accused of leaking government documents to Choi in collusion with Park.

In November, the prosecution indicted Jeong for handing over about 180 Blue House and government documents, including 47 classified as secret, to Choi from January 2013 through April 2016. Choi is also standing trial for allegedly having exercised undue influence in state affairs in collusion with the president. Park was impeached in December over the scandal.

“I admit to the prosecution’s charges in general,” Jeong said Wednesday at his trial.

He also admitted to the charge that he had colluded with the president. “From the perspective of a larger framework, I admit to having followed Park’s opinion and handed over documents to Choi and then went through correction processes,” he said. “The president said I should listen to Choi’s opinions and reflect them if there is any need.”

Park admitted in a televised public address in October that she asked Choi to help edit her speeches at the beginning of her term.

Jeong’s admission that the president was a co-conspirator in the leaks was a reversal of his argument during a pretrial preparation conference on Dec. 29. At the time, his lawyer said Jeong denied the charge of receiving an order from the president or colluding with the president.

Jeong’s lawyer Kang Kap-jin said his client agonized about admitting to the collusion charge. “He wanted the court to make a legal judgment on that part,” Kang said.

The 49-year-old aide to Park has served her throughout her entire political career. He became an aide to Park in 1998 when she entered politics by winning a legislative by-election in Daegu. He was reportedly selected by Park’s then-chief of staff Chung Yoon-hoi, who is the former husband of Choi.

Along with two other longtime aides to Park, Lee Jae-man and Ahn Bong-geun, the trio was known by the nickname “The Three Doorknobs” for their direct access to the president.

During the trial, the prosecution revealed that Jeong and Choi had frequent contacts - 1,197 exchanges of text messages and 895 phone calls from February 2013 till December 2014. Of the text messages, 237 were Jeong’s messages to Choi to confirm if she received emails containing documents, such as drafts of Park’s speeches.

The prosecution also revealed testimony by a former presidential speechwriter as circumstantial evidence that Choi had interfered in Park’s speeches.

During the prosecution’s investigation, Cho In-geun, former secretary for presidential speech and records, said his drafts, which were sent to the president via Jeong, were later revised to include some awkward expressions.