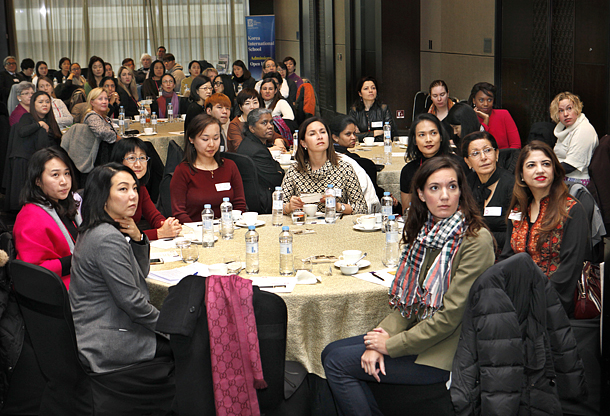 Members of the Seoul International Women’s Association (SIWA) listened to students’ frank recounts of what it was like to grow up in Korea with a foreign mother at a gathering on Wednesday as the association launches its Philanthropy Project to fund a multicultural education program this year.

“The first time that I was able to look back on my 20-year struggle growing up as a child in a multicultural family was actually in a public speech I delivered at a multicultural student program in Suwon, Gyeonggi,” said a student at Kyonggi University surnamed Lee, whose mother is from Japan. “It was the first time I shared with my parents my experience of being bullied at school because of my background.

“I realized then that the role of parents in helping their children with multicultural backgrounds is so important,” she added, addressing some 40 members at the talk hosted in the Conrad Hotel in Yeouido, western Seoul.

“I lived in the United States for some seven to eight years until I came to Korea with my dad,” said a high school student surnamed Lee who goes to All Love School, an alternative school for multicultural children. “I knew I was going to be different, but it was okay because I had my father.

“But then he passed away in an accident when I was in elementary school here, and after that, I thought I had no one. Then I went to All Love School, and met lots of different kids and made friends because they were in the same position as I was. I could talk to them and actually feel comfortable. I could be me when I was at the school.”

The Seoul International Women’s Association, comprising more than 400 women from over 45 countries, is seeking to fund a multicultural education program in Korea.

“Our decision to select the multicultural students’ education issue is not only based on data but also because it aligns very well with SIWA’s international and multicultural spirit,” said Anne Choe, president of the international women’s association. “We will be interviewing six programs recognized by the Ministry of Education and then selecting one to fund.”

The project carries a lot of meaning for members of SIWA, many of whom themselves are bringing up children in a multicultural setting.

“I am a marriage immigrant to Korea,” said a member of SIWA from the United States. “I have a 16-month-old son and he often gets pointed at by Koreans who say out loud the word ‘foreigner’ whenever they see him. What can I do to help him face the society here?”

“We certainly are the representatives [for this issue],” said Raheela Nasrullah Khan, wife of the Pakistani Ambassador to Korea Zahid Nasrullah Khan. “We can help the issue gain more traction in the country, when we discuss these matters as the spouses of ambassadors, and take this to our societies and our children, and spread the awareness from our homes and onto the children’s schools and more.”

Experts at the event said multicultural children could be the next harbingers of the country’s development, if only the country can overcome the racial discrimination.

“Some Koreans remain open and friendly toward students from North America or primarily English-speaking countries,” said Lee Hee-yong, head director of All Love School. “But many still discriminate students from less developed countries.”

“The most challenging issue for Korean society is to overcome this discrimination,” said Kim Yeon-kwon, director of the Center for Multicultural Children at Kyonggi University. “According to the Ministry of Education in 2016, there are some 100,000 multicultural students in Korea and two-thirds of them are in elementary school. They may be the next generation of global leaders to bridge Korea with other countries.”