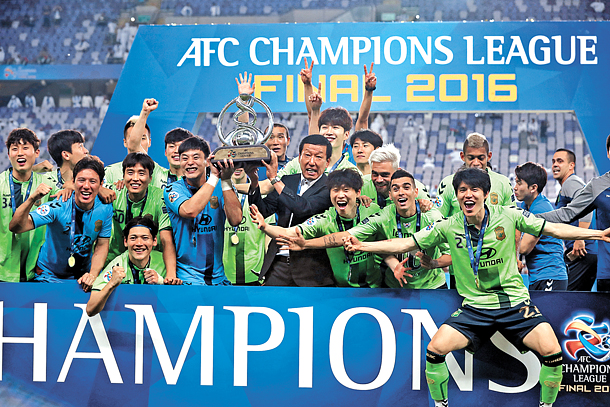 Reigning Asian club football champions Jeonbuk Hyundai Motors will not get a chance to defend their title this year due to a bribery scandal.

The South Korean club was disqualified from the 2017 Asian Football Confederation (AFC) Champions League, the K League said Thursday. It said the Entry Control Body (ECB), a judicial body independent of the AFC, reached the decision following its review of Jeonbuk’s eligibility.

The ECB, established last December, has jurisdiction over reviewing and ruling on a team’s eligibility for entering the AFC Champions League (ACL) among other continental events.

Last year, one of Jeonbuk’s scouts was convicted of bribing referees in 2013. They were docked nine points by the K League’s disciplinary committee - which cost them a chance to win their third straight domestic league title - and were fined 100 million won ($85,700).

Jeonbuk went on to win the ACL in November by beating Al Ain of the United Arab Emirates. Jeonbuk also secured their spot in the 2017 ACL by finishing second in the K League Classic.’

In a statement, the AFC noted that Jeonbuk have been ruled ineligible because of their “indirect involvement in activities aimed at arranging or influencing the outcome of matches.”

According to a document on eligibility rules, clubs involved in “arranging or influencing the outcome of a match at the national or international level” will be barred from the ACL for one year. The AFC General Secretary Windsor John said last month that the Asian football body has “zero tolerance towards match manipulation and has done more than many other bodies to tackle that threat to sport.”

Jeonbuk said they will take the case to the Court of Arbitration for Sport (CAS), the world’s top sports tribunal, to “justify our participation” in the ACL.

Jeonbuk have 10 days to ask the ECB for the reason for its decision. And within 10 days of the reception of the ECB’s response, Jeonbuk may then take the case to the CAS.

Jeonbuk had been paired in Group H with Adelaide United of Australia, Jiangsu FC of China and a playoff-winning team to be determined later.

With Jeonbuk’s disqualification, Jeju United, which earned an ACL playoff spot after finishing third in the K League Classic, will take Jeonbuk’s place in Group H. Ulsan Hyundai, fourth last year in the domestic league, will get into the playoffs in Jeju’s stead.