Kwon leaves to play on the European stage

Kwon leaves to play on the European stage 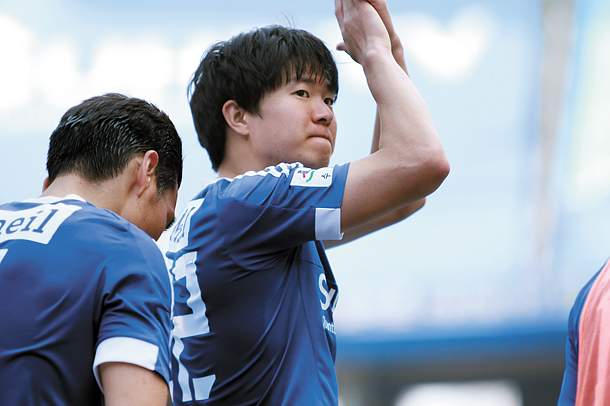 Kwon Chang-hoon, a midfielder, is leaving his K-League Classic team Suwon Samsung Bluewings to join the French football team Dijon FCO. Before he left, Kwon said he is following his dream to play on the European stage. [SUWON SAMSUNG BLUEWINGS]

The K-League Classic’s elite club Suwon Samsung Bluewings had to bid farewell to one of its homegrown players, midfielder Kwon Chang-hoon, after he signed a deal to transfer to Dijon FCO, a French association football club based in Dijon.

While the Bluewings may have felt a hint of regret when sending off one of their rising prospects, Kwon, spotted at Incheon International Airport on Wednesday morning, was all smiles.

The 23-year-old midfielder who played for Mae Tan high school in Suwon, the youth team of the Bluewings, turned professional in 2013. During his four years with Suwon’s youth team, Kwon played in 109 games while tallying 22 goals and 9 assists.

After turning pro, he played a leading role when Suwon won the 2016 Korea FA Cup as the team’s playmaker on the pitch. He also did more than his share when the team finished as runner-up in 2014 and 2015 at the K-League Classic.

A testament to his prowess on the pitch, he was called up to play for the Korean national team last year at the young age of 22 to help the team get through the second round of qualifiers for the 2018 Russia World Cup.

And it just took two games for him to prove his worth, piling in three goals. He left a strong impression with his smart plays and work ethic. During the 2016 Rio Summer Olympics, he helped Korea advance to the quarterfinals by scoring two goals.

According to Suwon’s official announcement on Kwon’s transfer agreement, he has inked a three-year deal with 1.2 million euros ($1.27 million) as a transfer fee. Both teams agreed not to announce Kwon’s annual salary.

“Salary itself isn’t that high,” said Kwon’s agent. “Last summer, he got offers from Al-Jazeera in the United Arab Emirates for $5 million, three million as transfer fee and two as yearly pay.”

“But he refused the offer,” the agent added.

“My longtime dream of playing in Europe is more important than money,” Kwon said. “Since I have to fulfill my military duty in the next three to four years, I want to give it my all at a bigger stage when I have the chance.”

Dijon FCO was established in 1998. Although it is not a big club, Dijon FCO was in the first division during the 2011-12 and 2016-17 season. Currently, the team is ranked 16th out of 20 teams with four wins, eight losses and eight draws.

In the French league, a team is demoted down to the lower division if it finishes the season ranked 18th or below. Dijon FCO recruited Kwon out of the K-League by pouring in the third-highest transfer fee in the club’s history.