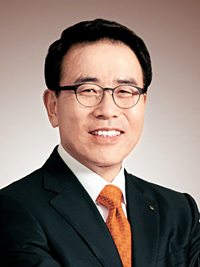 The 59-year-old CEO will replace incumbent Han Dong-woo after shareholders approve the nomination in March.

Cho was competing against Wi Sung-ho, CEO and president of Shinhan Card, but Wi withdrew his candidacy during the final interview on Thursday.

“Wi expressed his intention to withdraw, saying that it was proper for Cho to become chairman for the future of Shinhan,” the group said in a statement.

The committee consisting of the current chairman of Shinhan Financial Group and six other board directors began a meeting at 2 p.m. Thursday and started final interviews of the candidates at 3 p.m.

Alongside Cho and Wi, Choi Bhang-Gil, CEO of Shinhan BNP Paribas Asset Management, was also vying for the top post.

Lee Sang-kyung, who leads the nomination committee, emphasized a “stable leadership transfer” during the meeting at Shinhan Bank’s headquarters in central Seoul. “[The committee] will put an emphasis on morality, management planning and insight when choosing a new chairman,” he said.

Cho started his career at Shinhan Bank in 1984. After working with the bank’s human resources and global business divisions, he became president and CEO of Shinhan BNP Paribas Asset Management and then head of the banking unit in 2015.

He is credited with sustaining Shinhan Bank’s leading position amid unfavorable economic conditions and low interest rates. A series of earnings surprises from the bank further cemented Cho’s standing entering this year. Net profit in the third quarter of 2016 grew 20.7 percent year on year to 1.5 trillion won ($1.3 billion).

And since Shinhan Bank takes up 70 percent of all net profit at Shinhan Financial Group, the head of the bank is usually considered the most favored to head the group.

Ten candidates competed for the top position at the bank, which is on track to becoming a private company after selling a 29.7 percent stake to a group of private financial companies.

Woori’s recommending committee is led by Chang Dong-woo, the investment chief at IMM Private Equity and Woori Bank’s outside director. IMM Private Equity is one of seven financial companies holding a slice of Woori shares. The new CEO will be chosen among top executives including former and current vice presidents and heads of subsidiaries that have served the bank in the last five years.

Other major banks expected to undergo a leadership change this year include KEB Hana Bank, where CEO Ham Young-joo’s term is ending in March, and NH Financial Group, whose chairman, Kim Yong-hwan, will step down in April.