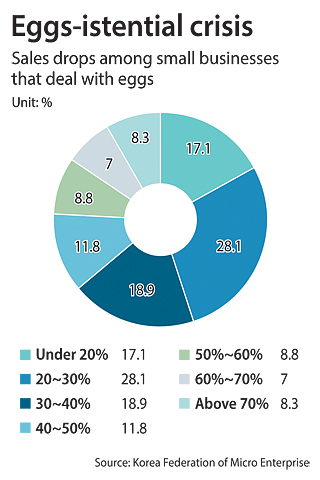 Nine out of 10 small businesses that deal with eggs say they have been affected by the avian influenza outbreak, according to survey results published by the Korea Federation of Micro Enterprise on Thursday.

The research was conducted on 247 businesses related to eggs including egg sellers, bakeries and restaurants. The questions focused on comparisons of revenue and profit before and after mid-November when the first bird farms were hit by the disease in North Jeolla.

The percentage of business reporting falls in profit was even higher at 97.9 percent. About 33 percent saw profits fall 20 to 30 percent. Businesses that saw a more than a 50 percent drop in profit accounted for 21.8 percent.

The federation asked in what other ways the businesses were affected and the most common answers were through a short supply of eggs and less spending by the public because of rising prices.

The research also revealed that small business operators were not satisfied with the government’s response to the egg crisis.

Almost eight out of 10 respondents said they didn’t feel its effectiveness at all.

“Even before the short supply of eggs, small businesses were already suffering in the aftermath of the new anti-corruption law,” said Choi Seung-jae, chairman of the KFME. “Now they’re facing a double whammy.”