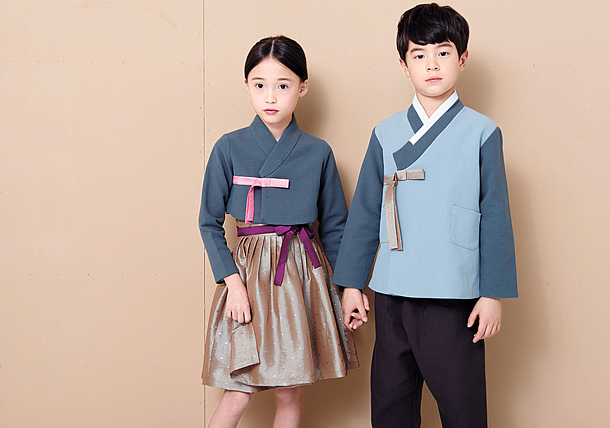 Lotte Mart is the first discount retail chain to sell its own line of traditional Korean clothing, known as hanbok. There are nine outfits designed for women and children. [LOTTE MART]

Lotte Mart began selling its own line of traditional Korean clothing on Thursday, in time for Lunar New Year when it is most widely worn. This is the first time a discount retail chain has developed its own line of hanbok, as the clothing is known in Korean.

The price of one outfit is around 100,000 won ($85), much lower than hanbok designer brands that usually go for about 700,000 won. Unlike traditional hanbok that is made from stiff fabric and hard to move in, Te’s products were made to be worn in daily life as well, with flexible fabric that can be easily cleaned in washing machines.

“We noticed rising demand among the younger generation for hanbok as a daily fashion item,” said Shin So-young, a manager of Lotte Mart’s private brands. “The focus was to keep hanbok’s beauty while not missing out on practicality as an everyday item.”

Hanbok was once the attire of daily life until modernization shifted sartorial taste toward Western-style clothing. Now, the traditional dress is mostly worn during major traditional holidays such as Lunar New Year.

But hanbok has been seeing a resurgence in recent years as more young people are opting to visit old palaces and streets in Seoul while wearing the traditional garb. It has led to a re-emergence of hanbok rental shops and small brands producing modernized hanbok that fit contemporary design and comfort sensibilities.

Many foreign tourists, too, have put wearing hanbok on their to-do list, and major companies are catching on to the trend. Lotte Duty Free is operating a photo booth at its Sogong-dong store in central Seoul this month where people can rent out hanbok for free. Rival SM Duty Free is running a similar rental service.