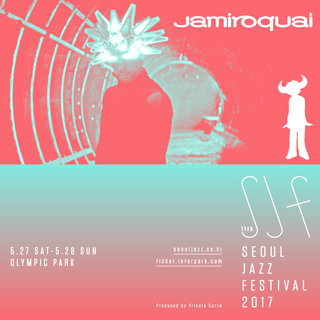 The annual Seoul Jazz Festival is returning for its eleventh year this May with an impressive line-up of musical acts.

Among the artists that were confirmed to appear in the upcoming festival’s first lineup are the electronic duo Honne, veteran jazz band Tower of Power, jazz vocalist Cecile McLorin Salvant, and most notably, the Grammy-award winning British acid jazz band Jamiroquai.

The internationally acclaimed British jazz band debuted in 1992 and is known for their breakthrough 1996 album “Travelling Without Moving,” which contained the hit singles “Virtual Insanity” and “Cosmic Girl.”

Meanwhile, fans have been showing an explosive response to the upcoming festival. The early bird ticket discount special that went on sale Thursday sold out within two minutes.

The two-day Seoul Jazz Festival is being held at Olympic Park in Songpa District, southern Seoul on May 27 and 28. Remaining tickets will go on-sale at a date that has yet to be announced.