Ahn maintains he won’t give up race to presidency

Ahn maintains he won’t give up race to presidency 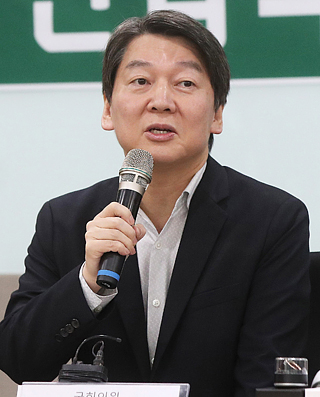 Ahn Cheol-soo, former co-chairman of the People’s Party, is gearing up for the long presidential race ahead, repeatedly claiming this year’s race will be between himself and frontrunner Moon Jae-in of the Democratic Party.

Ahn’s resolution to go all the way, despite his rather low approval rating - he is now ranked fourth with 4.8 percent support - is likely to complicate political calculations for former UN Secretary General Ban Ki-moon, who is expected to declare his bid for president in the coming weeks.

Ban, who returned home last Thursday and has since been on a national promotion tour aimed at boosting his presidential prospects, could find himself waging a fierce battle with the software-mogul-turned-lawmaker to win the nomination if he chooses to join the primary of the People’s Party.

Ahn’s combative resolution for presidency, despite his lackluster approval rating, comes as the former UN chief is having a hard time consolidating and expanding his support base since his homecoming last week. Despite his weeklong itinerary nationwide, visiting places that bore social and political significance for both conservatives and liberals in the name of national unity, his approval rating has actually fallen in the latest poll compared to the one conducted before his return.

In a poll conducted from Sunday through Monday, Ban’s approval dropped from a week earlier from 22.2 to 20 percent, with the percentage gap between Ban and Moon now rising to 11.4 percent from 3.9 percent the previous week.

In a previous survey conducted from Monday through Friday last week, Moon led with 26.1 percent to Ban’s 22.2 percent.

This is exacerbated by a number of gaffes during the course of the national promotion tour, which generated a perception among some that he is incapable of touching on issues of great significance for working families and acts more like an aloof government official. Touching on this, Ahn said Wednesday, “There are growing questions from the public over whether Ban’s presidential victory would really meet the demands of the people who took out to the streets demanding a change of power.”

Ahn added that Ban might choose to abandon his presidential ambition after the Lunar New Year holiday, after realizing how hard it will be.

Observers note that the conservative support Ban enjoys now could shift to Ahn’s if Ban struggles and falters in the rigorous vetting process during the primary.

“If Ban’s approval rating doesn’t go up, as much as previously expected, or he gets brutally damaged in the course of the vetting process, it could generate the perception among conservatives that he would be no match for Moon Jae-in,” said Lee Sang-il, director of the political consulting group Agenda Center. “Conservatives and those in the middle would then flock to Ahn.”