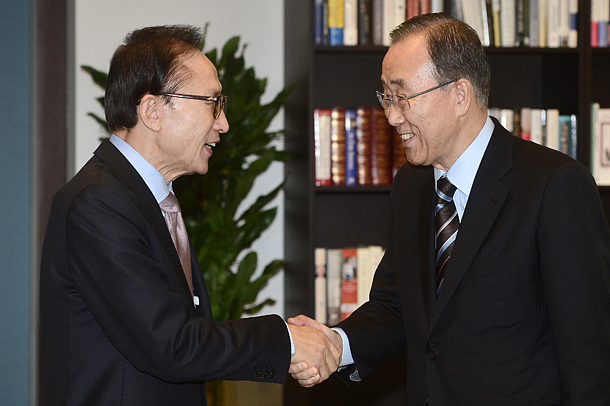 Former UN Secretary General Ban Ki-moon met with former President Lee Myung-bak on Thursday and had a 30 minute talk, leading to speculation that the former diplomat is trying to rally conservatives behind his yet-to-be declared bid for presidency.

The former UN chief visited Lee’s office at 4 p.m. Thursday in southern Seoul and had a conversation during which the former president asked Ban to make use of his experience from the United Nations to improve the country, according to Kim Hyo-jae, former senior secretary for political affairs during the Lee administration.

Kim, however, denied that Lee and Ban discussed political matters, such as Ban’s widely expected run for president. “It is Lee’s belief that it is not appropriate for a former head of state to jump into domestic politics,” Kim said.

Ban’s meeting with the former president came as his approval rating fell in the latest poll, despite his weeklong national promotion tour apparently aimed at boosting his presidential prospects. The public’s halfhearted reception of Ban’s activity in the first week of his return raised questions in the political circle as to whether the lifelong diplomat has what it takes to win the Blue House.

His visit to Lee could be taken as a sign that Ban is trying to draw support from conservatives before he moves on to forge political alliances with those in the opposition who are upset with Moon Jae-in of the Democratic Party, who leads in most polls.

If Ban intended to use his meeting with Lee as an opportunity to rally conservatives, he is expected to approach the Bareun Party, formed by former Saenuri lawmakers who voted to impeach President Park last month, to discuss joining the party. Under that scenario, up to 40 Saenuri lawmakers who represent districts in Chungcheong and Seoul could follow Ban to join the Bareun, leaving Saenuri with no politician who has an actual shot at the all-important election.

Many in the Bareun Party are expressing hope that Ban will choose their party over the minor opposition People’s Party.

“Ban has been communicating with us under the table since his return last week. Whether he will join our party will be determined shortly after the Lunar New Year’s holiday,” said Choung Byoung-gug. According to the JoongAng Ilbo, those in the Bareun with ties to former President Lee took Ban’s entry into the party for granted, saying he would join after the holiday.

Ban himself stated the need for him to join a political party, confessing the financial burden on him to pay for everything from renting campaign offices, hiring drivers to buying vehicles that he had been provided for in the past as a public official.

With such growing expectations, those in Ban’s virtual presidential campaign continued to say nothing has been determined as to Ban’s party affiliation.

“Ban’s entry into Bareun is what Bareun members are only wishing for. Nothing has been determined on that issue,” said Lee Sang-il, a former Saenuri lawmaker now in Ban’s camp.