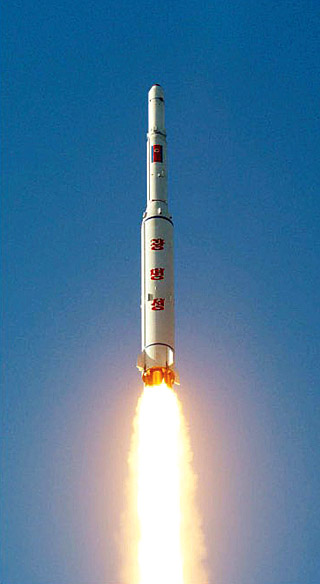 A file photo of the Kwangmyongsong-4 from the North’s state-run newspaper. [RODONG SINMUN]

In the first major policy change about North Korea’s weapons of mass destruction in nearly a decade, Seoul will focus more on blocking Pyongyang from actually using the weapons instead of trying to deter their development.

The change was described by an official from the South Korean government Thursday who requested anonymity due to the sensitivity of the issue.

“For almost 10 years, [the South] tried in vain to freeze North Korea’s nuclear weapons development program or scrap it entirely through the six-party talks and other efforts,” said the source.

“But none led to any tangible results.”

For the new strategy, the Joint Chiefs of Staff established a so-called Weapons of Mass Destruction Response Center on Jan. 1 to better respond to North Korean provocations by predicting Pyongyang’s military capabilities five to 10 years from now and devising ways for the South to defend itself from them.

The group is composed of three different departments, a drastic expansion from the past when only one department was allotted for the same task.

In another tip-off from the South Korean military, a senior official said that North Korea appears to have recently developed a satellite that uses an optical camera it bought last year from abroad.

The international community widely views North’s satellite development as a cover to test the ballistic missiles needed to put the satellites into orbit.

Sources told Yonhap that Washington appears to have detected them on Monday when the U.S. Navy “hurriedly moved” its sea-based X-band radar system to the western part of the Pacific Ocean from seas off Hawaii.

The preparation of the two missiles could be a “strategic message” to the incoming Donald Trump administration, the officials told the news agency.

A senior official in the Ministry of Unification denied any knowledge of the matter on Thursday when asked by a Korea JoongAng Daily reporter. Seoul has yet to officially admit catching any hints of Pyongyang preparing for a missile launch.

Pyongyang announced through its official Korean Central News Agency on Jan. 8 that it will fire an ICBM “any time, any where,” backing up a claim from leader Kim Jong-un on Jan. 1 that it was “in its final stage” of test-firing a missile that can reach American territory.

In the same news report carried by the state broadcaster, an unnamed official from the North’s Ministry of Foreign Affairs warned that the U.S. “will have to embrace a new mindset” about Pyongyang, considering that it’s developing hydrogen bombs and nuclear warheads capable of being mounted on ballistic rockets.

U.S. Defense Secretary Ashton B. Carter said during an interview with NBC’s “Meet the Press” on Jan. 8 that the U.S. would shoot down any missiles test-fired by North Korea if they head toward the United States or its allies, saying the Pentagon was making sure it was always “one step ahead of the North Koreans” in terms of missile defense readiness.

If Pyongyang does push through with its first ICBM test, a local military pundit recently said that one possible time frame could be early March, when Seoul and Washington kick off their annual joint military drill, Key Resolve.

Other possible dates suggested by the South’s Institute for National Security Strategy in a report that was released earlier this month are Feb. 16, the 75th anniversary of former leader Kim Jong-il’s birth, and April 15, the 105th anniversary of North Korean founder Kim Il Sung’s birth.