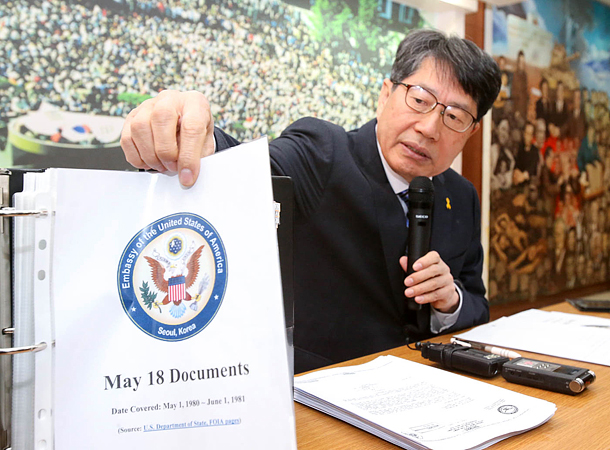 At a press conference on Thursday, Kim Yang-rae, executive director of the May 18 Memorial Foundation, makes public some of the 89 declassified documents which outgoing U.S. Ambassador Mark Lippert conveyed to the foundation. [MAY 18 MEMORIAL FOUNDATION]

Outgoing U.S. Ambassador Mark Lippert conveyed 89 declassified documents related to the Gwangju uprising in 1980 to the May 18 Memorial Foundation.

Lippert, during his visit to Gwangju on Wednesday, conveyed the previously classified U.S. Embassy documents to the foundation, which commemorates the democratic uprising and massacre in the city in May 1980.

The compilation included reports and documents from the embassy leading up to and in the aftermath of the Gwangju uprising, between May and December of 1980.

Lippert, who heads back to Washington on Friday after serving as U.S. top envoy to Seoul for the past two and a half years, visited the May 18 memorial park in Gwangju and met with the foundation leaders.

The Central Intelligence Agency on Wednesday also published nearly 13 million pages of declassified documents online, which included those pertaining to the 1950-53 Korean War and the Gwangju movement.

These documents were previously accessible only from four computer terminals at the National Archives in Maryland. The foundation said Thursday that the 89 documents it received from the U.S. Embassy may overlap with files on their previous records, but that it will analyze the documents for any new information it can glean on the happenings in 1980.

The 10-day democratic uprising involving students in Gwangju took place between May 18 and 27, 1980, during which citizens took up arms and formed civilian militias, claiming control of the city.

A bloody massacre followed when the Chun Doo Hwan regime sent special troops for a crackdown.

According to official government data, a total of 191 civilians lost their lives during the uprising. But civic groups and family members claim higher numbers.

The foundation previously obtained over 1,200 declassified U.S. government documents from the National Archives and Records Administration (NARA) in 1996 and has been analyzing them.

While the documents it received from the U.S. Embassy this time overlap in large part with these previously obtained documents, portions that had been redacted have been restored, according to the foundation.

“We would now be able to fill in the blanks of the documents that we have previously received, and we plan to gather these missing pieces together to fill in the puzzle,” said Kim Yang-rae, executive director of the May 18 Memorial Foundation, in a press conference on Thursday. “However, it will still be difficult to find out about a command to fire, the trend within the military authorities or other sensitive secret information.”

“Precedent is important in terms of diplomatic relations,” he added. “It is very significant that the U.S. Embassy conveyed its documents related to May 1980 for the first time. It is an expression of trust.”

A June 23, 1980, memorandum to the director and deputy director of Central Intelligence on the warning assessment for East Asia, following a June 18 meeting in the aftermath of the May uprising, describes Chun Doo Hwan’s recent activities and suggest he is moving “toward seizing power and establishing one-man rule.”

It added, “There is a possibility of assassination and terrorist activities generated by Kwangju students.” The reports generally uses the old Romanization of Korean locations and names like Gwangju or Jeolla province.

“With the security situation quiet, US-ROK relations are satisfactory,” the memo also notes. “The Combined Forces Command is functional, and ROK troops used to suppress the Kwangju riots are back to normal positions. US-ROK military cooperation has resumed.”