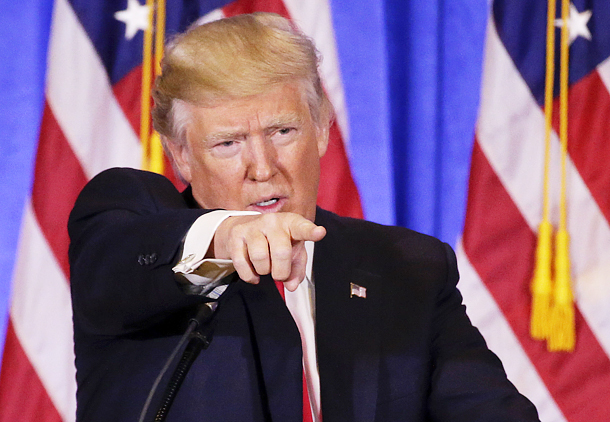 The election of Donald Trump as the 45th president of the United States presents many challenges on our economic front. [AP/YONHAP]

Making an economic forecast for the year is my annual ritual every January. In fact, forecasting is the most challenging part of economics.

Many of the economic variables are impossible to foresee, and unforeseen events that are outside the economy will impact the economy.

For example, stock prices, according to economic theories, are impossible to predict. I often joke to my students during my lecture that “There is no reason for me to work as a professor if I can predict the stock prices.”

Events that are outside the field of economy are also hard to predict for economists. Who would possibly predict last year Brexit, Trump’s election and the impeachment of President Park Geun-hye? Making an economic forecast, taking into account the impact of those events, is impossible.

Therefore, I would like to go over possible risks of our economy this year, instead of presenting a simple figure.

First, the U.S. economy will make a serious impact on our economy this year. Trump’s trade protectionism is targeting China, but we are likely to suffer from it because we are also recording a current account surplus that is more than 7 percent of the gross domestic product.
The interest rate increase of the United States is also a threat to our economy. The Korean economy’s recovery is slow and it is not ready to increase the rates. If the U.S. interest rate is increased, capital will move to the United States. Currency will fluctuate rapidly and various problems may follow.

Second, China’s rebalancing is also a burden. The Chinese economy completed its period of rapid growth and entered the stage of a mid-rate growth. The investment rate cannot be 50 percent as it once was, and the economy is rebalancing from investment to consumption.

Based on the technology development, its reliance on foreign technologies is also rapidly decreasing. China’s changes are disadvantageous to Korea, because Korea’s exports to China are focused on investment goods and components.

Third, household debt has reached a serious limit. Household debt is over 150 percent of the household disposable income, far higher than the average of the OECD. Although it is not serious enough yet to cause a financial crisis, but the burdens to repay the principal and interest will go up when Korea’s interest rate goes up along with the U.S. rate increase. Low-income families are already facing their limits, and the income inequality will further worsen if they bankrupt and social conflicts will grow deeper.

Fourth, industrial restructuring is urgent. Although many of the companies in the shipbuilding and maritime industries are facing extreme challenges due to their excessive production facilities. As their restructuring speeds up, massive layoff are expected.

The steel and construction industries need restructuring. The construction industry in particular played a crucial role by comprising two-thirds of the economic growth in the third quarter of 2016. But the real estate market is slowing down already, and the industry will highly likely face a hardship.

Last, political instability is a risk. It is likely that the president will have to step down through impeachment, and the unprecedented development is destined to bring about an extreme chaos in the political landscape. Because politics and the economy are related, the political chaos will bring about a negative impact on the economy. The country will become hard to sensitively and timely respond to outside pressures. It will become difficult to make urgent modifications to our system and push forward restructuring.

These are the obstacles that our economy has to overcome this year. The only consolation is that the risks are well-known factors. What we have to do now is make a preparation so that the risks will not shove the Korean economy off the cliff.


*The author is a professor of economics at Korea University.