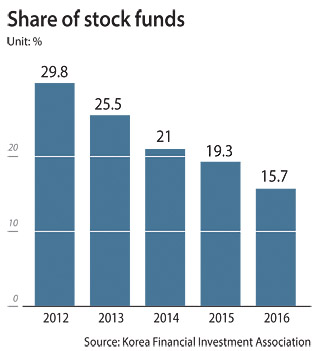 There was a time when funds tied to Korean stock were the mainstream financial product, but lately, investors have been shying away from stock funds due to their low returns and the lackluster performance of companies beyond just the market bellwethers.

Last year, the share of stock funds compared to all fund products hit an 11-year low, according to the Korea Financial Investment Association, which represents securities and asset management companies, on Friday. Investment in local stock funds made up 15.7 percent of all funds at the end of last year, or 73.69 trillion won ($63.37 billion) out of 469.31 trillion won.

The latest reading marks a drastic downturn from its heyday before 2008, when a boom in fund products attracted a huge amount of capital inflow. The share of stock funds was 39.3 percent in 2007, as they delivered handsome returns amid favorable economic conditions. The money that went into them doubled between 2006 and 2007, from 46 trillion won to 116 trillion won.

But the party didn’t last long. The following year, Lehman Brothers fell, and the shock wave could be felt in Korea, where the share of stock funds fell to 39 percent in 2008 and 38 percent in 2009.

Analysts see low returns as the main reason. “Over the past three years, the average return of stock funds stood at negative 1.57 percent,” said Kim Kyung-mi, a researcher at market tracker FnGuide. In 2016 alone, the average return was just 0.63 percent. Investors of large-cap stocks enjoyed relatively higher returns, an average of 8.4 percent.

The low yield translated to lower investment in Korean stock funds, which saw an outflow of 8.15 trillion won last year compared to the previous year, according to FnGuide. Kim said investors’ tendency to avoid high-risk products contributed to the large outflow.

Alongside bond products, investor attention also turned toward real estate and special asset funds, as many took advantage of a real estate boom in the country, FnGuide said.