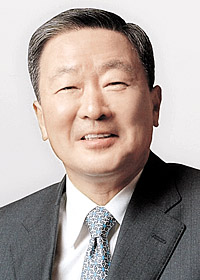 Celebrating the 70th anniversary of LG Group on Friday, Chairman Koo Bon-moo encouraged some 40 CEOs under him to upgrade the business structure to make sure the conglomerate will survive the next 100 years and beyond.

“LG is having its 70th birthday thanks to the efforts and sacrifice of a number of senior managers and employees, including its founding chairman,” he said at a banquet at Konjiam Resort, Gyeonggi. “Looking back, we have been consistently transforming ourselves to provide better value to customers. We have wisely overcome difficulties and pains over the course of growing into a global company and we have to change and innovate once again, based on past lessons.”

The banquet followed a two-day global strategy meeting of LG executives presided over by his younger brother and vice chairman, Koo Bon-joon, in which Bon-joon stressed the importance of “entrepreneurship.”

LG was established by his father, Koo In-hwoi, in 1947 as a chemical company, which was later changed to LG Chem, based in Seodaesin-dong, Busan. The company began with 20 employees and made 300 million won ($256,586) in revenue in the first year. It grew over the past 70 years to earn 150 trillion won annually with some 220,000 employees, including 85,000 overseas as of last year.

The achievement is largely due to an array of innovations involving radio, television, washing machine and telephone technology as well as life necessities such as plastic and toothpaste.

These advances took place as Korea underwent rapid industrialization in the 1970s.