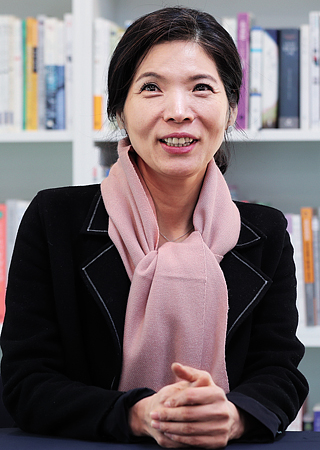 It was a heated summer day in August 2003. At one facility for unmarried mothers, an 18-year-old woman who had just given birth held her child all day long. She was sweating and seemed too exhausted to even sit up. People offered to hold the child for her but she quietly shook her head. The day after, her new born baby was sent to an adoption agency.

This is a scene engraved in Seo Eun-kyo’s mind. Seo was a working mom at the time and was visiting the facility for volunteer work on a friend’s recommendation. Now 49 years old, she is the founder and chairwoman of the non-profit organization Women’s Haengboknuri, which means “World of Happiness.”

Since that day, Seo spent every weekend at such facilities. She cleaned, did laundry and even looked after mothers and their children. Her heart sank every time a baby left for an adoption agency. The weekly visits soon became a serious project.

“Most facilities that care for unwed mothers are so small there’s no room for them to raise their children, which leaves them with no choice but to give them up for adoption,” Seo said. “So I wanted to build a center for young single mothers.”

Women’s Haengboknuri was established in 2014 under that initiative, and now, 14 years after that August day, her goal has been achieved. A facility opened on Tuesday under the name Aurm, which comes from the Korean verb auruda, meaning “to put together.” The 4-storey building has living rooms, classrooms, dining rooms, care centers and can accommodate up to 40 mothers.

Aurm not only helps women give birth, but also raise their children, which is why its interior was decorated like a normal home. There’s also a public health center nearby that provides check-ups and support expenses for childbirth.

Mothers can stay at the center for up to five years. In the afternoon, they continue their school studies or receive vocational education in areas such as hairdressing. During classes, a nursing teacher takes care of the children.

Seo’s daytime job is as CEO of On Off Korea, which provides payment services for business to consumer operators. But to operate a welfare organization, she had to acquire social-welfare certification. Under the initiative to build a “facility for unwed mothers,” she studied and passed the national test in 2014.

The facility became much bigger than planned. Her initial blueprint was to rent apartments and make some kind of a common living space. But she changed her mind after seeing many single mother facilities close down after the law for single-parent families was revised.

The new rules prohibited adoption agencies from running such facilities, which cared for almost half the nation’s unwed mothers at the time. “I thought lesser facilities for young single mothers would cause even more problems, such as abandoning babies,” she said. So Seo decided to build a facility herself and spent four billion won of her own money ($3.4 million).

As a mother of two boys and a working mom herself, Seo understands how hard it is for mothers to raise their children while working, let alone what it is like for women who do so without the help of a second income or partner to help raise the children. Her next plan is to create jobs for mothers by establishing a meat processing factory nearby. All revenue will be used to help single mothers become independent, said Seo.