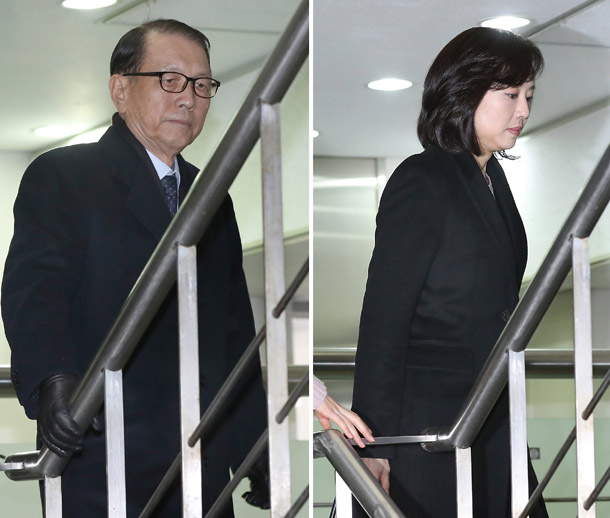 Former presidential chief of staff Kim Ki-choon, left, and Minister of Culture, Sports and Tourism Cho Yoon-sun, right, make their appearance at the Seoul Central District Court in southern Seoul, Friday, to attend the court’s review session on the validity of a pre-trial arrest warrant sought by the special prosecutor team for their alleged role in having blacklisted cultural figures deemed critical of the government. [YONHAP]

Two confidants of President Park Geun-hye, including an incumbent minister, attended Friday court hearings to resist an independent counsel’s attempt to detain them as suspects in creating a blacklist of artists critical of the administration.

Minister of Culture, Sports and Tourism Cho Yoon-sun and former presidential chief of staff Kim Ki-choon were accused of abusing their authority and perjury by independent counsel Park Young-soo. Cho and Kim were questioned for 21 hours and 15 hours from Tuesday to early Wednesday over allegations that they masterminded the creation and management of the blacklist to deny dissident artists state support.

The warrant hearings for Cho and Kim took place at the Seoul Central District Court. Judge Seong Chang-ho presided over both sessions. The independent counsel team, looking into the influence-peddling and abuse of power scandal involving President Park and her associates, said they were responsible for creating and managing a list of nearly 10,000 artists and cultural figures to cut state funding and oppress them.

Cho and Kim are key associates of the troubled president, impeached last month over the scandal. Cho was Park’s senior political secretary from 2014 to 2015 and was appointed as the culture minister last year. Kim served as the presidential chief of staff from 2013 till 2015.

The warrant hearing of Kim took place first and he was questioned for about three hours by Judge Seong.

While serving as the chief of staff, Kim masterminded the campaign to blacklist liberal artists critical of the Park administration, the independent counsel suspected. Kim reportedly denied his charges at the hearing.

After Kim’s hearing, Judge Seong immediately began Cho’s hearing. She is the first sitting minister to stand a warrant hearing. In a National Assembly hearing last month, Cho admitted to the existence of the blacklist, but denied her involvement.

The main opposition Democratic Party said Friday that it will push forward a motion to demand the dismissal of Cho.

Kim and Cho were sent to the Seoul Detention Center after the hearings to wait for the results, expected to come out late at night.

Meanwhile, the independent counsel team said Friday that it will summon Choi Soon-sil, the controversial friend of President Park, for a questioning. Choi is currently going through her own criminal trial on charges of coercing conglomerates to provide her with massive funds in collusion with the president.

Assistant independent counsel Lee Kyu-chul said Choi will be questioned as a co-conspirator in the bribery scandal involving the president and conglomerates including Samsung Group. She was questioned once last month, but refused to cooperate with further investigation. “If she does not show up tomorrow, we will obtain an arrest warrant,” Lee said.

The independent counsel’s plan to question Choi as a bribery suspect appeared to be an attempt to make up for the setback caused by a local court’s rejection of a detention warrant against Samsung leader Lee Jae-yong. The Seoul Central District Court on Thursday struck down the counsel’s request to detain the tycoon on charges of bribing Park through Choi in return for government support of a merger of two Samsung units. The deal played a crucial role in Lee’s control of the conglomerate.

After Samsung argued that Lee is not a bribery suspect but a victim of coercion, the court denied the warrant request. It said there was a possibility of legal controversy in defining the nature of Samsung’s support for Choi as bribes.

The court also rejected the warrant request because the counsel did not question the alleged bribe recipients, Choi and President Park. Asked if the team wants to question Choi because of the reason, assistant counsel Lee said, “It is a very important question, but I have no comment at this stage.”

He also said the team may reapply for the detention warrant against Samsung Vice Chairman Lee after questioning Choi.