Korea receives heaviest snowfall of the year so far

Korea receives heaviest snowfall of the year so far 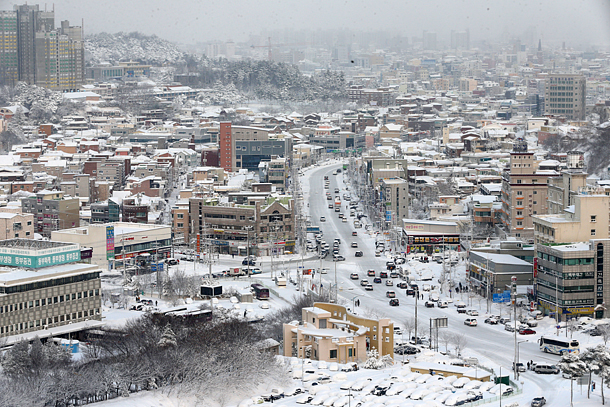 The streets of Gangneung, Gangwon, are covered after a heavy snowfall on Friday afternoon. The Gangwon region was under a heavy snow advisory issued by the Korea Meteorological Administration on Friday at 11:20 a.m. [YONHAP]

The high terrain of Gangwon experienced the heaviest snowfall, with an average of 30 centimeters. Misiryeong, a hill 826 meters high in Goseong County, was slammed with over 33 centimeters.

A four-car accident on the Seohaean Expressway at around 5:20 a.m. resulted in the death of a 40-year-old man and five injuries, according to local fire authorities. Several people were sent to nearby hospitals for medical treatment.

The crash occurred 251 kilometers (156 miles) from Seoul in Seosan, South Chungcheong, when a 22-ton freight truck slipped on the icy road, blocking it at one point. Four vehicles that were following collided into each other.

Traffic was controlled near the scene for four hours.

An Asiana Airline flight scheduled to leave Gimpo International Airport for Jeju Island at 2 p.m. was canceled due to the snow, and so was an Eastar Air flight that was planned to leave Gimpo airport in the afternoon for Jeju.

According to data provided by the Korea Airports Corporation, at least 62 flights scheduled to leave Gimpo airport and 22 that were supposed to arrive there were delayed by half an hour or more.

At Incheon International Airport, 177 departing flights and 60 arrivals were postponed.

For Saturday, the Korea Meteorological Administration predicted most of Korea will see only 1 centimeter of snow and morning temperatures will plummet to minus 8 degrees Celsius (17.6 degrees Fahrenheit).

The high for Friday in Seoul was 0 degrees. Freezing temperatures will likely continue throughout next Thursday.

On Sunday, the low is expected to be minus 9 degrees, while the high will be minus 4. In the afternoon, snow will fall in South Jeolla, North Jeolla and Jeju Island.

On Monday and Tuesday, the morning low will hit minus 11, inching back up to minus 9 on Wednesday, the weather authority said.

The four-day Lunar New Year holiday, which kicks off next Friday, will mostly see clear skies and milder temperatures, the lowest being around minus 5 to minus 3 degrees, while the highest will climb up to 2 to 3 degrees.