Pak Se-ri, former Korean professional golfer, will be giving out tips and lessons to readers regularly.

Pak was the first Korean golfer to play on the LPGA Tour when she joined the tour in 1998. Pak’s victory at the 1998 U.S. Women’s Open encouraged many Korean women to play golf. She is the leader of the game in Korea and has encouraged many generations of LPGA players such as Park In-bee and Choi Na-yeon, who followed her footsteps into the LPGA.

Golf is a sensitive sport, so it’s important to know the basics to improve your swing. Pak Se-ri’s Champion lesson begins with the proper grip and setup. 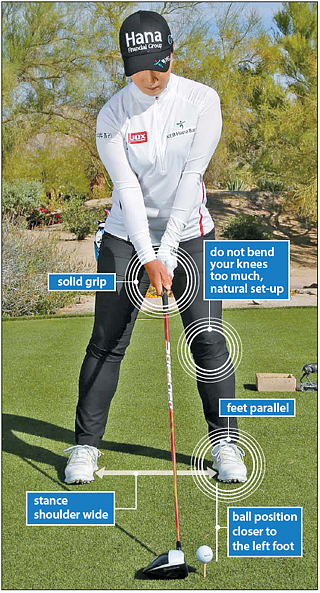 Not many amateur golfers have proper grip. Many tend to change their grip to be more comfortable. This can include overlapping or interlocking one’s pinky and index finger, or using a baseball grip.

The baseball grip is not recommended since the hands are separated.

“I have a neutral grip,” said Pak, noting that in this case, the left index finger is important. “When you grip with only your left hand, it’s important to have your thumb more on the right side of the club.”

Once the left thumb is placed at a right position, then the right hand is placed on top of it.

When gripping, the left hand plays a bigger role than the right hand. 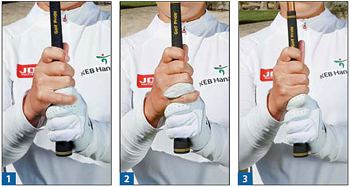 “I think ball position is the most important thing in set up,” Pak said. “If your ball position changes slightly, it makes a big difference in the height and trajectory of the ball.”

After ball position, the next important thing is weight and posture. When setting up, it is best to gently lift the club and place it down. The gap between the end of the club and one’s body should be about one fist.

One’s feet should be parallel to each other.

“I used to open my left foot, but now, they are parallel,” said Pak. If a player is flexible, it’s better to have their feet parallel. On the downswing, it’s easier to maintain strength on the left leg if the feet are parallel. However, if the left foot is open, it will be easier to transfer weight to the left leg on impact.

“For feet position, players can find the one that best works for them,” Pak said.