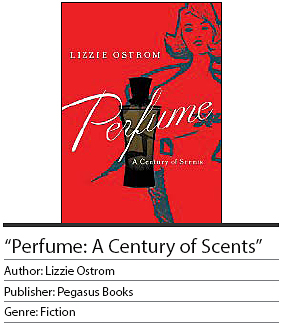 Fragrance has always been wrapped in social and economic issues, controversy, memories and history as Lizzie Ostrom so persuasively shows in the lively “Perfume: A Century of Scents.”

The 10 chapters - each devoted to a single decade - examine 10 different perfumes that influenced that decade. A sharply focused introduction to each chapter further puts the decade - and its fragrance fashion - in perspective.

While “Perfume” is by no means an encyclopedia about scents, it is a solid pop culture guide that incorporates fragrance fashion into the shifting tides of society. Many of the perfumes mentioned through the decades have disappeared - a mere whiff of a memory - no matter how popular at the time. This is true not just of those from the 1920s but also those manufactured in the 1990s. Others such as Chanel No. 5 have been classics from the first day and remain favorites of all generations.

Advertising fragrances isn’t a new idea. In 1908, the British firm Gosnell’s launched a hot air balloon shaped like the bottle of its Cherry Blossom to fling out flyers over crowds - an idea that seems modest next to perfume fountains that threw fragrance into the air during the Victorian Era in England. What has changed is the rise of the internet and certain sites that curate myriad scents in one-stop shopping, making exotic perfumes even more accessible.

Celebrities’ influence on fragrance also goes back decades. Compare the Gibson Girls of the 1900s mentioning the “utterly obscure” Poinsettia with the avalanche of current pop stars such as Taylor Swift or Justin Bieber hawking their scents.

Technology and chemistry gave companies new ways to produce scents, taking it away from the rich and elite of society and making it available to the masses. Ostrom shows that each decade had certain scents that define it. During the global depression of the 1930s, Joy by Jean Patou, “the most expensive scent ever released,” was introduced and is still available today. World War II brought a new challenge as many perfumeries urged their customers to “treasure your last pinch” of fragrance as advertisers urged against buying until after the war. As a result, France ceased being the epicenter of fragrance production as more began to be manufactured in America. The return of fragrance during the 1940s was seen as a symbol of hope. That’s a far cry from the “big, bad, loud-and-proud perfumes of the 1980s” when many restaurants put up signs banning Giorgio Beverly Hills, along with smoking. AP